Whirlpool (NYSE:WHR) felt some pressure in the second quarter from raw material and tariff inflation, but that was no match for pricing and mix improvements. Whirlpool managed to grow both revenue and earnings during the quarter, driven mostly by strength in North America. The company's strong performance, as well as a less pessimistic view of cost inflation, led it to raise its full-year earnings outlook.

Whirlpool reported second-quarter revenue of $5.19 billion, up 0.9% year over year and $160 million above the average analyst estimate. Adjusted for currency, revenue was up 3.5%.

North America, Whirlpool's largest market, shone during the quarter. Revenue was $2.9 billion, up 3% year over year on a constant-currency basis. Earnings before interest and taxes, or EBIT, jumped 7%, while EBIT margin rose 0.5 percentage points to 12.4%. 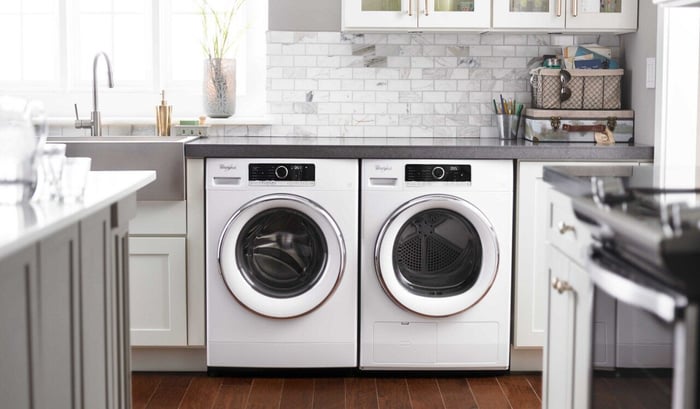 Overall, Whirlpool reported an adjusted EBIT margin of 7% in the second quarter, up from 6.7% in the prior-year period. Price and mix improvements were good for a positive impact of 2.5 percentage points, but this was mostly offset by raw material and tariff inflation, other cost increases, marketing and technology investments, and currency.

Non-GAAP (adjusted) earnings per share came in at $4.01, up from $3.20 in the prior-year period and $0.29 better than analysts were expecting. Share buybacks over the past year helped boost the per-share numbers a bit, with the outstanding share count down nearly 7% year over year.

With a strong second quarter in the books, Whirlpool raised its full-year outlook for both revenue and earnings. The company now expects to produce approximately $20.6 billion of revenue, up $300 million from its previous outlook. This new guidance represents year-over-year growth of about 3% at constant currency.

Whirlpool also expects its adjusted EBIT margin to be around 6.8% in 2019, up from a previous range of 6.5% to 6.8%. It expects price and mix to make a larger positive contribution, and raw material and tariff inflation to be more muted, than it previously expected.

Higher revenue and improved margins will push adjusted earnings per share to a range of $14.75 to $15.50 for the full year, up from a previous outlook of $14.00 to $15.00. Whirlpool now expects free cash flow to be around $800 million, the low end of its previous guidance range, giving the company plenty of ammunition for its ongoing share buyback program.

Earnings should get a small boost from lower interest payments. Whirlpool plans to use the $1 billion in proceeds from the sale of compressor business Embraco to repay a $1 billion term loan in August. This will strengthen the balance sheet and move the company closer to its goal of reaching a gross-debt-to-EBITDA ratio of 2.0 by the end of the year.

Whirlpool is still seeing strong demand for its products in North America, and it's been able to offset the impact of tariffs so far with pricing and mix changes. With a guidance bump for the full year, the company appears confident that it can continue to grow earnings in this environment.