Please ensure Javascript is enabled for purposes of website accessibility
Free Article Join Over 1 Million Premium Members And Get More In-Depth Stock Guidance and Research
By Adam Levine-Weinberg - Jul 24, 2019 at 8:20AM

Investors are worried about whether the downward spiral at J.C. Penney represents a threat to mid-tier mall owners.

2019 has been a bad year for most mall REITs. With the number of U.S. store closures on pace to hit a record this year, investors have soured on owners of retail real estate, particularly owners of mid-tier malls.

The carnage worsened over the past week. Shares of Washington Prime Group ( WPG ) and Pennsylvania Real Estate Investment Trust ( PEI 3.25% ) both tumbled more than 10% between last Wednesday and the end of trading on Monday. (Both REIT stocks recovered a bit on Tuesday.) The main catalyst was a report that came out on Thursday evening indicating that J.C. Penney ( JCPN.Q ) had hired advisors to study options for restructuring its debt. 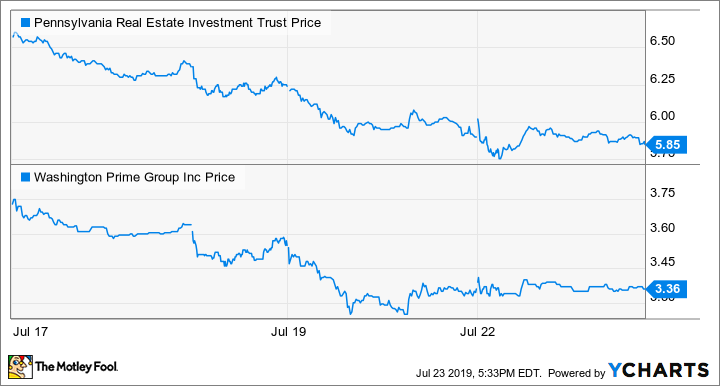 However, Washington Prime and PREIT would not be hurt equally by financial distress at J.C. Penney. As a result, the two stocks shouldn't have reacted the same way to this news.

Contrary to some rumors, J.C. Penney isn't planning to file for bankruptcy, nor does it face much near-term bankruptcy risk. The retailer ended last quarter with about $1.75 billion of liquidity and no major debt maturities for several years, giving it some time to turn itself around.

That said, the company's profitability has plummeted in recent years, and sales trends weakened considerably about a year ago. J.C. Penney is working to improve its inventory management and enhance its merchandise assortment to get sales growing again and drive a gross margin recovery. Yet there is no guarantee that these efforts will be successful in the face of a challenging environment for retailers.

Indeed, given how J.C. Penney is struggling while the economy is strong, the iconic department store could be forced to close a massive number of stores in a recession -- if it survived at all. That would leave PREIT and Washington Prime with huge numbers of anchor vacancies.

JCPenney is a key tenant for both mall REITs. The department store chain has 15 locations in PREIT's portfolio of 21 malls and accounts for 1.7% of its annualized gross rent. Meanwhile, it has 37 stores in Washington Prime's roughly 50 traditional enclosed malls, providing 1.1% of the REIT's annualized base rent.

PREIT and Washington Prime both have lots of JCPenney stores at their malls. Image source: J.C. Penney.

Thus, both PREIT and Washington Prime would have a huge number of anchor spots to fill if the retailer closed a large number (or all) of its stores. And while the amount of rent generated may not seem like much, anchor tenants make big contributions toward a typical mall's utility bill and common-area maintenance costs. Moreover, many smaller tenants get automatic rent reductions when a mall has one or more anchor vacancies. Thus, the financial impact to the likes of PREIT and Washington Prime would be far greater than just the lost base rent.

On the bright side, department store closures can represent an opportunity for a mall owner to bring in better tenants that will drive more traffic to the mall. Redeveloping an anchor store can be quite expensive, though.

That's bad news for Washington Prime. The REIT is currently in the first year of a multiyear plan to spend $300 million to $350 million to redevelop 29 vacant or soon-to-be-vacant anchor spaces at its malls. It will likely be incurring substantial redevelopment expenses until at least 2022 to deal with those anchor replacements, pressuring its balance sheet.

By contrast, PREIT has already replaced 13 struggling department stores in its portfolio over a three-year period. Management currently estimates that its last few ongoing projects will wrap up over the next 12 months. That includes a project announced last month that will replace a Sears at a mall in Massachusetts with a Burlington off-price store and other smaller tenants.

PREIT can handle whatever happens next

Executives at PREIT and Washington Prime are rooting for a comeback at J.C. Penney, which would head off the possibility of mass store closures. But if that doesn't materialize, at least PREIT will have already completed its current round of anchor replacements by the time it might have to deal with a large number of JCPenney store closures.

Indeed, PREIT is positioned for a big rebound in its earnings power over the next two years, due to the timing of its current anchor replacement projects. That will allow it to fund another round of redevelopment projects to deal with JCPenney closures in 2021 and beyond.

On the other hand, Washington Prime will have backfilled just a fraction of its current anchor vacancies by the end of next year. It can't afford to have another big anchor tenant start closing stores so soon. Thus, the possibility that J.C. Penney will go from bad to worse is a huge risk for Washington Prime over the next few years -- whereas it shouldn't be a big problem for PREIT whatsoever.