Please ensure Javascript is enabled for purposes of website accessibility
Free Article Join Over 1 Million Premium Members And Get More In-Depth Stock Guidance and Research
By Brian Feroldi, Sean Williams, and Chuck Saletta - Jul 24, 2019 at 6:00AM

Find out which stocks have our team of healthcare experts feeling excited right now.

The demand for high-quality healthcare remains strong in good times and in bad. That makes the sector a great place for investors to search for stock ideas. 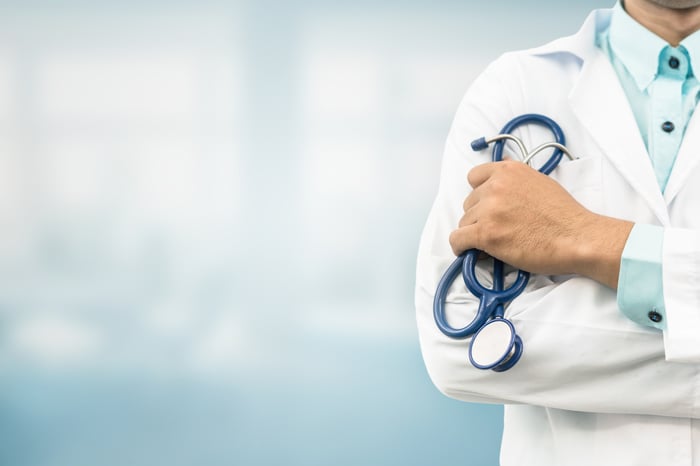 Chuck Saletta (AbbVie): Healthcare titan AbbVie has a major problem. The primary ingredient in its blockbuster arthritis medicine, Humira, is no longer covered by a patent, which would ordinarily open it to fierce competition. But the company has utilized patents on other parts used to bring that biologic to market to extend the life of its patent protection, somewhat staving off the competitive threat.

Still, that process can extend the life of the compound's patent protection for only so long. AbbVie's low market price compared to its forward earnings estimates largely reflects the fact that the market isn't anticipating the Humira party to last for all that much longer. AbbVie recognizes that risk, and in fact, it's a huge reason the company recently decided to acquire Allergan. Of course, Allergan has also been troubled in recent years, as it has been heavily reliant on its own blockbuster drug Botox.

While neither company is entering the merger from a position of strength, the merger will help the combined business become more efficient. AbbVie is projecting to deliver more than $2 billion in annual savings, starting around three years after the merger closes. Those cost savings are expected to help the company protect its ability to pay and grow its dividends, which is important to many investors attracted to AbbVie's nearly 6% yield.

In a nutshell, the merger buys AbbVie time -- time to better prepare for the loss of Humira, time to attempt to find more blockbusters to potentially replace that lost revenue, and time to try and squeeze more efficiencies to deliver more value. That new lease on life makes now a reasonable time to consider an investment in AbbVie.

In February, Intercept released top-line results from its long-awaited phase 3 Regenerate study for Ocaliva in patients with nonalcoholic steatohepatitis (NASH), a liver disease affecting up to 5% of the adult U.S. population, and the projected leading cause of liver transplants by the midpoint of the next decade. Ocaliva wound up meeting one of Regenerate's two co-primary end points, with a statistically significant reduction in liver fibrosis, but a nonstatistical yet positive trend in NASH resolution, relative to the placebo.

The reason Intercept never soared into the heavens following this positive data is because the highest dose of Ocaliva (which was also the most effective in clinical studies) led to instances of pruritus (itching) in 51% of patients, and the discontinuation of 9% of patients. There are clear worries that, even if approved, Ocaliva won't be for every adult with NASH, or that its run as a potential treatment for NASH won't have a long runway.

But the thing to remember is this: There are few therapies within striking distance of Intercept's Ocaliva in NASH. A handful of NASH therapies have already failed in mid- or late-stage clinical studies, and what successes we've seen are likely still years away from hitting pharmacy shelves. With there's a good likelihood of Ocaliva getting the green light from the Food and Drug Administration (FDA) in 2020, it should have years to gobble up significant market share in the NASH space, even if it's only for a certain subset of patients. As a $35 billion market, even a 5% share could wind up being very significant.

Ocaliva is also approved to treat primary biliary cholangitis (PBC), meaning the FDA is already familiar with its safety profile. With a potential $300 million in peak sales from PBC, and perhaps north of $1 billion annually from NASH, the company's current market cap of $2.6 billion appears inexpensive. That makes it an intriguing buy this July.

Brian Feroldi (Inogen): I'm a picky investor, but I'll admit that there's a lot to like about Inogen.

Inogen was founded in the early 2000s by a group of college students. One of those students had a grandmother who was prescribed oxygen therapy and complained openly about how she had to lug around a heavy oxygen tank. Those college students wanted to help, so they created a company called Inogen and developed a portable oxygen concentrator (POC), which creates a continuous stream of oxygen from the surrounding air.

These advantages have allowed Inogen to quickly take market share in the oxygen therapy market. Revenue, profits, and the company's stock have all soared in response: 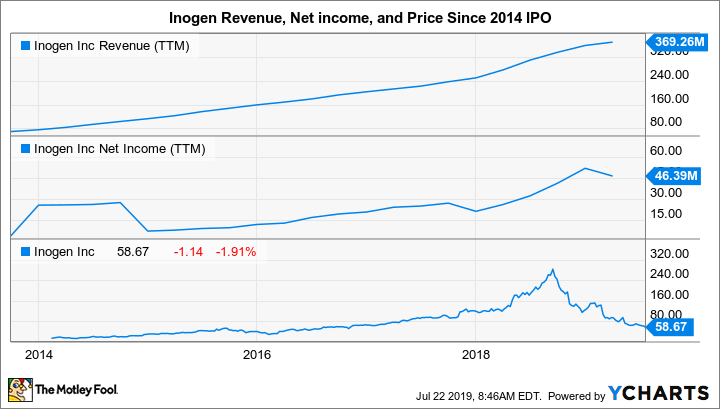 You'll notice that the company's stock has drastically declined over the last year. That weakness was caused by slowing growth due to a business model shift, lower-than-hoped-for productivity, and pressure from competitive bidding. Growth investors had abandoned the stock in response.

The slowing growth isn't great news, but the huge decline has made Inogen's valuation far more attractive than it has been in years. Shares are currently trading for about 30 times next year's earnings estimate. That wouldn't be a screaming bargain if the company wasn't able to grow its profits ever again, but Wall Street estimates that it will grow its bottom line in excess of 15% annually over the next five years. I think that growth rate is believable since the entire oxygen therapy market is growing by 7% annually and POC penetration remains very low. Buying shares today while they are on sale and holding for the long term could prove to be a profit-friendly move.