In a surprise twist, Facebook's (NASDAQ:FB) top-line growth rate accelerated in the company's second quarter. So much for management's guidance in its first-quarter earnings call for revenue growth rates to continue to decelerate sequentially throughout 2019. Adjusted earnings per share and free cash flow also rose nicely, highlighting the company's lucrative business model.

Here's a closer look at Facebook's strong top- and bottom-line growth, and the drivers for these metrics. 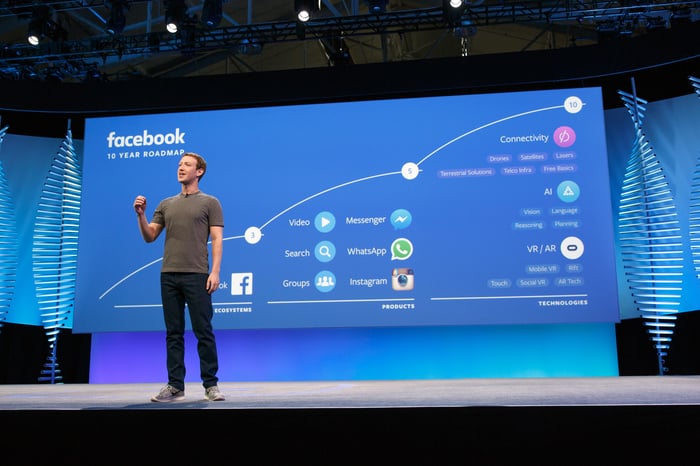 "We had a strong quarter and our business and community continue to grow," said Facebook CEO Mark Zuckerberg in the company's second-quarter earnings call. "We are investing in building stronger privacy protections for everyone and on delivering new experiences for the people who use our services."

Management also pointed out the company's impressive family metrics. About 2.1 billion unique users now user Facebook, Instagram, WhatsApp, or Messenger every day, and 2.7 billion people use at least one of these services every month. This is up from 2.5 billion monthly unique users across Facebook's services in its second quarter of 2018.

During Facebook's earnings call, Zuckerberg reiterated the company's intention to build out a privacy-focused social platform that integrates its different social networks with a focus on messaging and stories. The platform will be built out over the next five years, Zuckerberg said.

Despite the quarter's acceleration in revenue growth, Facebook maintained its outlook for decelerating top-line growth rates throughout the remainder of the year.