A component of Sir Isaac Newton's first law of motion is that an object in motion tends to stay in motion at the same speed and direction until acted upon by an unequal force. That doesn't apply to stocks, which can and do fluctuate on a daily basis.

Yet sometimes stocks of companies with good business prospects do keep to a general course, and though there may be ups and downs, their trajectory seems to remain upward. That's what three Motley Fool contributors believe is the case with The Trade Desk (NASDAQ:TTD), Cintas (NASDAQ:CTAS), and Zscaler (NASDAQ:ZS). Read on to learn why they believe these businesses that have already doubled still have more room to keep growing. 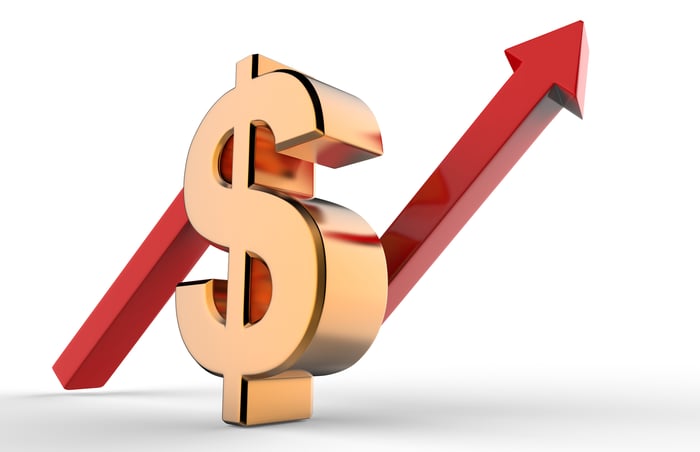 The Trade Desk benefits from the second wave of digital advertising

Jamal Carnette, CFA (The Trade Desk): Unless you've been living under a rock, you understand advertising is amid a generational shift. Traditional channels like television and print media are under strain from digital mediums, making investors in Alphabet and Facebook millions. Despite the duopoly in digital advertising, you're not too late to the party, because The Trade Desk has a long runway for growth.

Despite the medium shift, little else has changed: Brands are constantly looking to collect better data on potential buyers and ensure ads are placed appropriately to take advantage of this data. The Trade Desk's programmatic ad buying system allows this to occur in real time, increasing the efficacy of ad spending. The combination of a shift to digital advertising and programmatic delivery will continue to boost The Trade Desk's top line.

Shares of the company have doubled this year on account of a strong first-quarter report that included 41% revenue growth. More importantly, customer retention was above 95% during the quarter, the company's 22nd in a row. If you were late to the party and missed the shift to digital advertising, The Trade Desk is a way to take advantage of the second growth wave in the industry.

A double-double with room to grow

John Bromels (Cintas): Double? Phooey! Uniform rental specialist Cintas has seen its shares more than quadruple over the last five years. And the best part is, the company -- which has been turning itself into a one-stop shop for numerous business services -- still has plenty of room to grow.

Cintas' model for uniform rental is simple: It sends a delivery van or truck to the business location of a client, picks up soiled uniforms, drops off clean ones, and moves onto the next one. This process is usually cheaper and easier for clients than attempting to maintain laundry facilities on site. As the unemployment rate has fallen, a larger North American workforce has meant more uniforms to rent, plus the company has been successful in attracting new clients.

This success was on display in the most recent quarter, Q1 2019, when the company's uniform rental and facility services segment logged organic growth of 6.8%. Wait a minute: facility services? Yep: Cintas long ago realized that its delivery vans could transport more than just uniforms. Cintas rents floor mats and does restroom restocking as well. The company has even branched out into first aid kit restocking and fire and safety equipment monitoring, a segment that's growing even faster than uniform rental, with a 10.7% growth rate in the most recent quarter.

It's true that a recession or other event that causes the unemployment rate to tick upward would be a major setback for Cintas. But with the U.S. economy still humming along and unemployment remaining low, things are still looking pretty good for North America's largest uniform renter.

Betting on hackers to do their thing

Rich Duprey (Zscaler): Data breaches don't make the headlines they used to, though they're as prevalent as ever, with Facebook receiving a $5 billion fine recently from the FTC for consumer privacy violations.

The continued assault on our data is likely why Zscaler has more than doubled over the past year and is up fivefold from its March 2018 IPO, when it was offered at $16 per share. Because so much data has migrated to the cloud, Zscaler focuses its cybersecurity efforts there rather than on in-house networks.

Revenues are growing at a torrid pace, up 61% last quarter to $79 million, and by a like amount year to date. Quarterly losses, though, have also widened year over year, but at a slower rate, expanding to $12 million, or 22% worse than the year-ago period. On an adjusted basis, however, Zscaler turned a $6 million profit. It forecasts being profitable for the year on a similar basis, with non-GAAP earnings of $0.16 to $0.18 per share.

Cloud-based computing is only going to grow more, and Zscaler, as the early leader in the space, will likely capture a lot of the business that is moving to the cloud. However, because its stock has soared to such heights so soon, risk-averse investors may be leery about jumping on the bandwagon. It trades at lofty valuations when looking at price-to-sales and price-to-free cash flow metrics -- yes, it is free cash flow positive. And though this stock may be volatile, although it's so far mostly headed in only one direction, there's reason to think it will continue to rise a good deal more.