Amazon.com (NASDAQ:AMZN) sells more items from third-party merchants than it sells directly to customers itself. The company's marketplace business is worth more than twice as much as its retail operations, according to at least one analyst. And with the percentage of sales coming from third parties growing every year, Amazon represents a huge threat to eBay (NASDAQ:EBAY), which exclusively offers a marketplace to connect sellers and buyers.

One of the biggest drivers of Amazon's third-party sales is its Fulfillment by Amazon service. Merchants can ship their inventory to an Amazon warehouse where Amazon then places that inventory throughout its fulfillment network. Doing this, it can ensure those products get to customers' doorsteps in two days or less with Prime shipping.

eBay wants in on that action.

The online auction house has been piloting a program that allows sellers to take advantage of pooling their business with other eBay sellers to get volume discounts with logistics providers. It expects to launch the service, called Managed Delivery, to all sellers in the United States in 2020.

While eBay cites numerous benefits to both sellers and buyers in using the program, it'll have to overcome the huge head start of Fulfilled by Amazon (FBA). 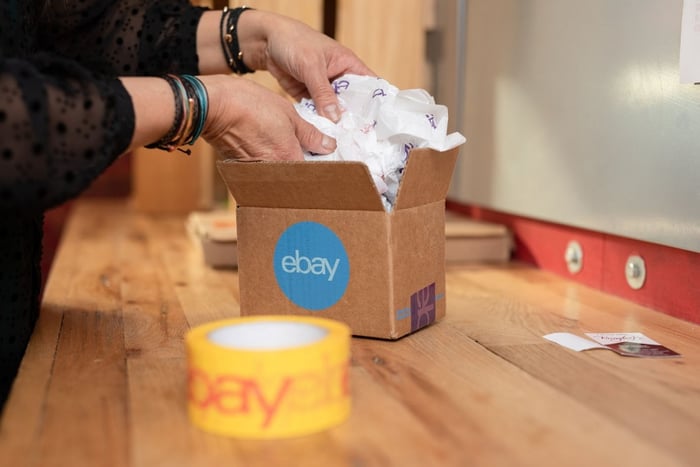 Winning over the FBA merchant base

The biggest detail buried in eBay's press release announcing Managed Delivery is: "The service will be available for fulfilling orders placed on eBay and other online platforms."

That's similar to how Amazon operates the FBA program. While the primary purpose is to make it easier to sell items on Amazon, it's not above shipping orders from other platforms, including eBay. Amazon may be dominant in online retail, but it's not the only show in town. Allowing FBA merchants to fulfill orders from other platforms makes the service more attractive to merchants, and ensures Amazon wins over more of its merchants' inventory. That's what allows it to offer over 100 million items eligible for Prime shipping.

With Managed Delivery, eBay is competing directly with Amazon to provide fulfillment services. But where Amazon owns its fulfillment network, eBay plans to merely extend volume pricing to its merchants. As a result, its pricing might not be as attractive as Amazon's could be.

That said, some sellers experience dramatically different fees from Amazon depending on whether their items sell on Amazon or another platform. That's one way Amazon is able to generate a profit from fulfilling those orders, but that practice has come under investigation by the Federal Trade Commission.

If eBay can attract a significant number of midsized sellers to Managed Delivery, it could provide a boost to its struggling marketplace business. The company reported a 1% decline in gross merchandise volume in the second quarter after adjusting for changes in foreign exchange rates. Revenue grew just 3% on an exchange-neutral basis.

Managed Delivery could provide buyers with a more consistent shopping experience on eBay. One of the big draws of Amazon is that Prime members know what to expect when they make an order. eBay, by comparison, can feel a bit like the Wild West. Sellers might reuse old packaging, buyers might not be able to track orders, and shipping prices and times can vary widely.

eBay has taken measures to incentivize sellers to include free shipping in their listings and to ship items quickly. But Managed Delivery will ensure products are packaged properly and shipped quickly, and buyers stay informed throughout the process.

Improving the shopping experience could help convince shoppers to buy more from eBay. The company has managed to consistently grow the number of buyers on its platform, but the amount they're buying keeps falling. Providing a more Amazon-like shopping experience could get those shoppers to come back to eBay again and again. But it needs to work on attracting the sellers first.