After growing sales 52% annually to reach revenue of roughly $3.6 billion in 2018 and expanding its first-quarter sales 43% compared to the prior-year period, Chinese video platform iQiyi (NASDAQ:IQ) expects year-over-year sales growth for the second quarter to come in between 12% and 18%. That's a concerning deceleration, particularly as the company has continued to deliver impressive paid-subscriber growth and expects that it will post strong premium-member additions throughout the year.

Currency headwinds are one factor in the forecast slowdown, but the biggest drag on the company's performance appears to be its advertising business. The company's second-quarter revenue target, combined with comments from management, suggests a big performance decline may be coming when the company reports earnings at the end of the month.

With encouraging growth for its membership services, distribution, and "other businesses" segments, iQiyi could certainly perform at the high end of its second-quarter sales target. That said, it's still worth homing in on the company's underperforming ad business ahead of its next earnings report in order to get a better sense of how much the unit could curb overall performance and what that might mean for the company's outlook. 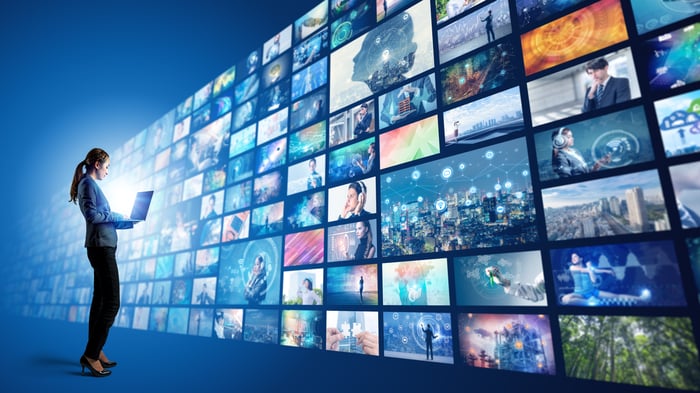 iQiyi's other segments have to make up for weak ad sales

iQiyi's membership services segment was already the core of the company's growth engine, and it will continue to be. Things look good on that front: Sales grew 64% last quarter to reach $513.4 million, making up 51% of overall revenue, and the strength of the premium-member business does a lot to mitigate the impact of a slowdown in ads. However, the need for growth in subscriptions, distribution, and other businesses to offset declines in the advertising segment was a notable departure for investors who had gotten used to quarterly revenue growth in the range of 40% to 50%.

There was already evidence of substantial deceleration at the end of last year, as advertising revenue grew 9% in the fourth quarter and 21% for the full year. Advertising revenue for the first quarter of 2019 was roughly flat year over year at $315.8 million (representing 31.6% of iQiyi's $1 billion revenue for the quarter), but the company now expects the segment to face significant headwinds.

From "cautiously optimistic" to "very cautious"

Heading into 2019, iQiyi's management described its outlook for the advertising segment as "cautiously optimistic," but the company now appears to have dimmer near-term hopes for the unit. In the first-quarter earnings call, CFO Xiaodong Wang seemed to suggest that the weak prospects for advertising sales could extend into 2020:

One ... reason why we see a very weak performance on the ad business is relatively we have a high base last year [to measure against]. ... So I believe you will see that kind of like a deterioration on the year-over-year growth coming to the second half of the year. But ... we remain very cautious on the forecast of the entire advertising business in the next few quarters or even next full year because of the relatively mix and macro environment.

Citing unfavorable comparisons in the first half of the year might make sense and help to explain evaporating growth. However, the criticism could also be raised that management and the company's investor relations team oversold progress in the ad unit in previous earnings calls and press releases -- without detailing business-specific challenges and shifts in the overall ad market.

Baidu (NASDAQ:BIDU), iQiyi's parent company, published a shareholder letter at the start of 2019 that stated "winter is coming" (a turn of phrase taken from HBO's Game of Thrones that essentially means "hard times are on the way") for Chinese tech stocks. Baidu has seen a bigger performance and stock drop-off than iQiyi in subsequent months, but the streaming video offshoot's own comments may have undersold the challenges at hand and contributed to increased uncertainty among investors.

The slowdown for China's economy and the uncertainty surrounding the trade situation are having an impact, but there are other factors at play as well. iQiyi had previously made statements suggesting that tech advancements for its in-feed ad platform could spur demand, but so far, this doesn't appear to be happening.

The company is also removing some ads and barring some advertisers from its platform -- either to comply with the suggestions from government regulators behind the scenes or to get out in front of the type of regulatory crackdown that has previously caused issues for Baidu.

Will the ad unit bounce back?

iQiyi has given multiple updates since going public last March that seemed to suggest that advertisers were warming to its dynamic ad solutions. And management still thinks that the overall segment can return to posting significant growth over the long term, despite second-quarter guidance portending a substantial downtrend for the ad business. Here's what CEO Yu Gong said about the outlook for the current fiscal year in the first-quarter earnings call:

At the same time, we are also introducing new innovative ad solutions such as immersive marketing, which helps convert the shows' highly supportive fans into customers of our advertisers. This demonstrates the value we bring to enhancing brand awareness and increasing advertising [return on investment]. As I mentioned on our last earnings call, we are looking to improve advertising monetization of our original dramas in addition to their role in driving subscription growth.

Ads delivered with iQiyi's original content now account for roughly 50% of advertising segment revenue, and its tech-driven "innovative ad solutions" account for between 20% and 40% of segment revenue from quarter to quarter. These advantages clearly aren't translating into big growth for ad sales at present, but it's actually not unreasonable to expect that the company's advertising business will bounce back. On the other hand, it looks like shareholders will have to be patient, and overall investor sentiment on the stock seems justifiably wobblier in light of the disconnect between management's previous statements and the current outlook.

The pitch has been that iQiyi can use its ad technology (including interactive ads and advanced targeting) and strength in original content to create especially effective delivery for advertising partners (while also generating money from less effective licensed content). This still seems viable over the long term, and I remain bullish on the stock.

China's economy is in a rough patch, but the long-term outlook for its streaming video and digital advertising markets remains promising. There's a good chance that iQiyi's ad business will bounce back, but investors should be prepared for it to be a significant damper on the company's overall performance over the next year.