Macao's casino-resort operators continue to jockey for position in the world's biggest gambling market. One company that often gets forgotten in the mix is Melco Resorts ( MLCO 4.48% ), which has a fairly small footprint in Macao, and very few properties outside of the region.

Despite being smaller than many rivals, Melco is holding its own in the battle for Asia's gambling revenue. And indeed, its second-quarter results show that it's taking market share from many of those competitors. 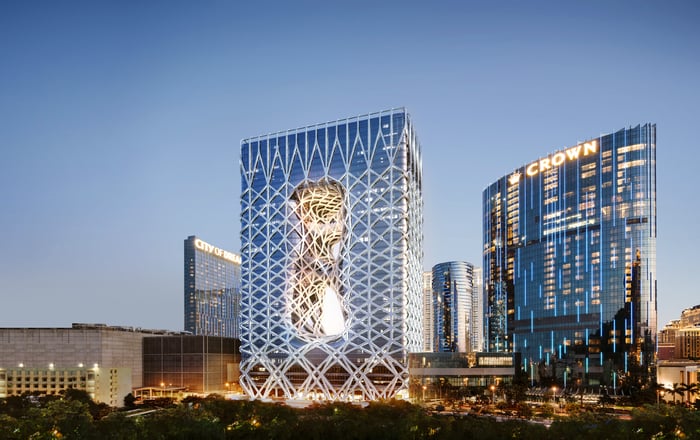 The performance was especially impressive given that Macao's overall gambling revenue was flat in the quarter. Usually, the overall market is like a tide that lifts or sinks all casino operators, but in this case Melco Resorts outperformed the market by a wide margin.

City of Dreams in Macao, the company's flagship property, accounted for a vast majority of the operating improvement. Its revenue increased from $577.8 million a year ago to $790.8 million, and EBITDA jumped from $171.5 million to $250.8 million. The addition last year of the Morpheus hotel tower to the City of Dreams complex helped it attract more customers last quarter.

Sometimes casino companies can benefit from an abundance of luck, and that was a tailwind for Melco Resorts, but the majority of its operating improvement came from increased VIP Play. Below is a table of gambling volume in the second quarter versus a year ago and you can see that VIP play jumped substantially.

Ironically, at Melco's two other resorts in the territory -- Altira and Studio City --  VIP volume declined by 33% to $7.5 billion. As strong as City of Dreams is right now, competition is winning business away from these two resorts.

The other major resort Melco Resorts owns is City of Dreams Manila, which is in The Philippines. That property has performed well in relation to its $1.3 billion cost of construction, generating $269 million of EBITDA in 2018.

Last quarter, the resort struggled against new competition, which led to a drop in rolling chip volume from $3 billion a year ago to $1.9 billion. Mass market table game drop held up better at $192.8 million compared to $196.9 million a year earlier.

Good luck helped on the VIP side, where the win rate came in at 5.21%, well above the 2.85% to 3.15% range that management expects. That helped revenue grow 1.3% to $176.1 million. But if the gambling volume trend continues we won't see revenue rise in coming quarters.

City of Dreams Manila is still a great long-term investment, but it may not continue to be the growth driver it was during the past few years.

Where Melco Resorts is going

Melco Resorts' properties are performing well in their markets, and that's a little surprising given the amount of new competition they face in Macao. Over the long term, growth for the company will come from its announced 19.99% stake in Crown Resorts Limited, and possibly from building a new casino resort in Japan, if it can win its bid to do so. If Crown recovers, it would provide an incremental benefit. Beyond that, look for Japan to be the focus for management over the next few quarters as every casino company in the world jockeys for one of just three licenses to be distributed in that market.