Intel (NASDAQ:INTC) released strong second-quarter 2019 results on Thursday after the markets closed, highlighting a surprising return to growth in PC chip sales and a narrower-than-expected decline from its data-centric business.

After initially jumping more than 2% early Friday in response, shares of the computer processor leader turned modestly lower by the afternoon's trading. Let's look at how Intel ended the first half, and what investors should watch for the rest of the year.

What happened with Intel this quarter? 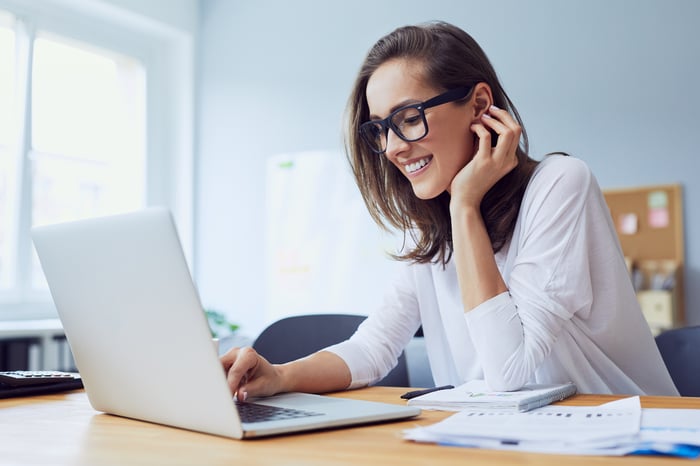 Second-quarter results exceeded our expectations on both revenue and earnings, as the growth of data and compute-intensive applications are driving customer demand for higher performance products in both our PC-centric and data-centric businesses. Based on our outperformance in the quarter, we're raising our full-year guidance. Intel's ambitions are as big as ever, our collection of assets is unrivaled, and our transformation continues.

This agreement enables us to focus on developing technology for the 5G network while retaining critical intellectual property and modem technology that our team has created. We have long respected Apple, and we're confident they provide the right environment for this talented team and these important assets moving forward. We're looking forward to putting our full effort into 5G where it most closely aligns with the needs of our global customer base, including network operators, telecommunications equipment manufacturers, and cloud service providers.

Considering its strength in the first half, Intel now expects full-year revenue to arrive at roughly $69.5 billion, up $500 million from its previous target. Intel also lowered its bottom-line outlook to call for 2019 GAAP earnings per share of $4.10 (down from $4.14 before), while simultaneously raising its guidance for 2019 non-GAAP (adjusted) earnings to be roughly $4.40 per share (up from $4.35 previously).

In the end, there was little not to like about this quarterly beat and raise from Intel. Though the market's enthusiasm was obviously tempered over concerns for just how many orders in the PC-centric segment were pulled forward on trade concerns, investors can take solace knowing Intel felt confident enough in its second-half prospects to increase its full-year adjusted earnings and revenue guidance anyway.