Look for Apple, Beyond Meat, and Wayfair stocks to make big moves over the next few trading days.

Stocks rose last week, with both the S&P 500 ( ^GSPC 1.17% ) and the Dow Jones Industrial Average ( ^DJI 1.87% ) reaching new all-time highs. The indexes were lifted by a generally strong start to second-quarter earnings season.

Beyond Meat has been a favorite IPO for investors, as it's soared by over 200% since its first day of trading in early May. That surge means Wall Street will be closely following the meat-substitute specialist's second earnings report as a public company on Monday. 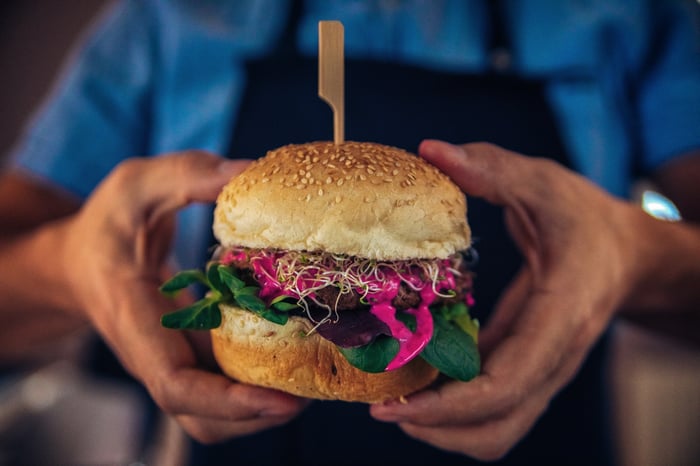 Beyond Meat's first-quarter report contained some elements of the blockbuster results that investors are hoping for out of a growth stock. Sales rose over 200% as the company signed up new restaurant and retailing partners to showcase its plant-based meats. Gross profit improved at a faster pace, but expansion spending ensured wider net losses.

CEO Ethan Brown and his team have predicted full-year sales of $210 million, which would mark a 140% boost over the prior year. Wall Street forecasts have pulled far ahead of that target and currently call for around $224 million of sales. Given that optimism, Beyond Meat's stock rally might stall if executives announce anything other than a blockbuster growth outlook this week.

The stocks of Apple and Microsoft have each spent time this year above the $1 trillion valuation mark, but the latter pulled ahead in recent weeks, thanks in part to strong earnings results that were powered by surging demand for its Azure cloud services. On Tuesday, Apple steps up to the earnings plate with a chance to recapture that eye-popping market capitalization.

Investors are hoping to see a return to revenue growth following a rare decline in iPhone sales in recent months. That boost will likely come mainly from Apple's soaring services division, which has been expanding at a double-digit clip over the past six months.

The services division is a much smaller part of the business than iPhone hardware, but the faster growth rate, higher margins, and steadier cash flow has Wall Street excited about the potential of that segment to transform Apple into an even stronger profit machine. Yet shares might still see short-term pressure this year, especially if CEO Tim Cook and his team project another revenue decline for the fiscal fourth quarter.

Wayfair has been a Wall Street darling so far in 2019, with shares far outperforming the market as investors focus on sales growth over profitability. The e-commerce specialist is consistently outperforming management's growth forecast, and that track record provides a solid base for its stock-price gains. Revenue jumped 39% in the latest quarter as Wayfair's user base passed 16 million.

That report contained some worrying signs of stress on the business, including slow growth in Canada and elevated advertising sales. Yet executives said those issues haven't convinced them to budge from an aggressive growth strategy that calls for heavy spending on distribution, tech development, and branding.

Management's approach of generating expanding losses gives Wayfair its best shot at securing a huge lead in the home furnishings niche, which it could then use to profitably deliver a wide range of products to customers around the world. Thursday's results will show whether that bullish scenario is playing out.