On Tuesday afternoon, Chipotle Mexican Grill (NYSE:CMG) reported another quarter of stellar growth in comparable restaurant sales. This caused the company's earnings per share to continue rising at a torrid pace.

Investors responded enthusiastically. In fact, Chipotle stock hit a new all-time high of $789.50 on Wednesday, up more than 200% from the multiyear low reached in early 2018, just before the company announced Brian Niccol as its next CEO. 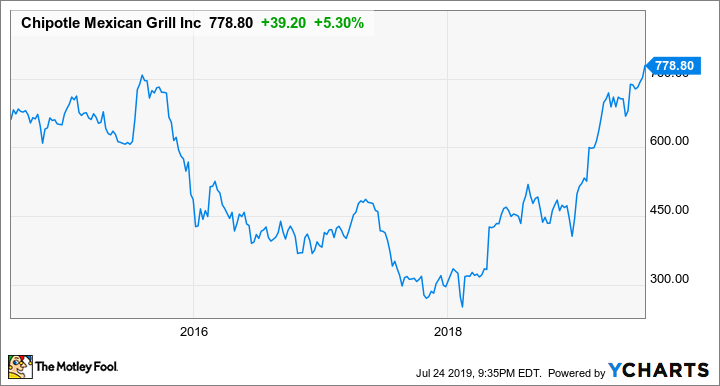 Indeed, Niccol has engineered an impressive comeback at Chipotle in a short period. The fast-casual pioneer has plenty of momentum, too, which suggests that the strong results could continue over the next several quarters. However, Chipotle stock seems too expensive relative to the company's earnings growth potential.

Chipotle's comp sales surged 10% year over year in the second quarter, accelerating slightly from a 9.9% gain in the first quarter. As a result, average restaurant sales for the last 12 months reached $2.1 million, up from $1.95 million in the prior 12-month period.

Total revenue rose 13.2% to a record $1.43 billion in the quarter, as Chipotle expanded its global restaurant count to 2,523 by the end of the period, up from 2,467 a year earlier. For the second consecutive quarter, digital sales roughly doubled, driving the vast majority of Chipotle's growth. In fact, digital sales accounted for 18.2% of the company's revenue last quarter.

Based on its strong year-to-date results, Chipotle raised its full-year comp sales guidance again. Management now expects a high-single-digit increase in comparable restaurant sales for the year -- implying modest deceleration in the second half of 2019 -- compared to its initial outlook for mid-single-digit growth.

Excluding various one-time items, including store closure costs, impairment charges, and legal reserves, Chipotle posted an adjusted operating margin of 10.4%. On the same basis, its adjusted operating margin was just shy of 9% in the second quarter of 2018. This margin improvement caused adjusted EPS to soar 39% year over year to $3.99. This easily beat the average analyst estimate of $3.76.

That said, Chipotle's profitability remains far inferior to what it was just a few years ago. In the second quarter of 2015, Chipotle achieved an operating margin of 19%. EPS reached $4.45 in that quarter. In other words, the company's EPS last quarter was about 10% lower than it was in the same period four years ago -- even though Chipotle has grown its restaurant count by 34% since then and its tax rate has declined.

There's no obvious path to a full margin recovery

Chipotle stock's surge to a new all-time high implies that investors think the restaurant operator has returned to full health. But while Chipotle is delivering strong comp sales and EPS growth, soaring labor costs and a mix shift toward lower-margin delivery orders mean that Chipotle's margin structure is likely to be permanently lower than it was a few years ago.

To be fair, Chipotle faced an unusual spike in avocado prices last quarter. Management has also stated that it is being conservative about price increases. Both of these factors suggest that the company is capable of delivering better margins than it did last quarter. However, unless the chain can keep posting double-digit comp sales growth for years on end, it appears that Chipotle's profit margin will stabilize well below where it peaked several years ago.

Chipotle stock last hit an all-time high in 2015. Back then, the company had spectacular profit margins, it was expanding its restaurant count at a roughly 12% annual clip, and it seemed to have massive growth potential both for the core Chipotle brand and for new restaurant concepts like Pizzeria Locale and ShopHouse Southeast Asian Kitchen.

Today, Chipotle's profit margin is lower, its rate of expansion has slowed dramatically, and the company has pretty much abandoned all of the new restaurant concepts it had been testing. In other words, while there's still some sales and profit upside ahead as it gets back on track, Chipotle is fundamentally less exciting as a growth company than it was four or five years ago.

Nevertheless, Chipotle stock trades for close to 60 times the company's projected 2019 profit. That seems like too much of a premium in light of its diminished long-term growth prospects.