It's even debatable as to whether there was really a bubble in the first place.

Pot stocks have taken an absolute shellacking in recent months. Just look at the top five Canadian cannabis producers. Shares of Canopy Growth (CGC -5.96%), Aurora Cannabis (ACB -3.62%), Cronos Group (CRON -0.88%), Tilray (TLRY), and Aphria (APHA) are all down more than 30% from their highs earlier in the year.

My colleague George Budwell even wrote recently that "the marijuana stock bubble has officially burst." But has it really? I don't think so -- at least not in the sense that many investors think of how a stock bubble ends. Here's why. 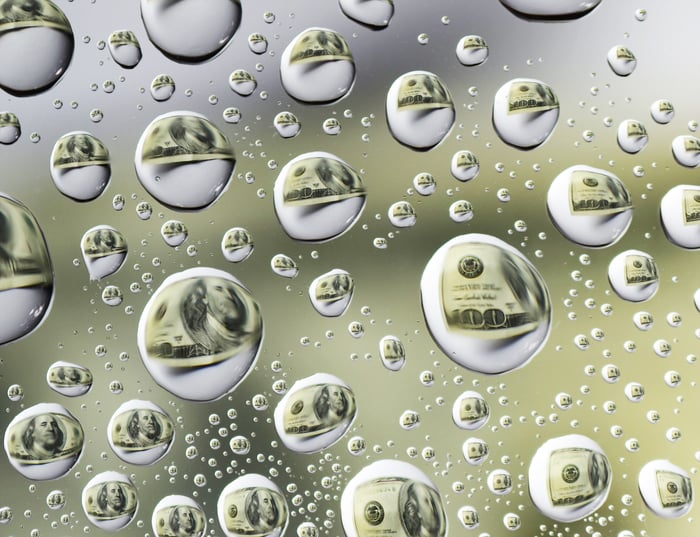 Probably the most important thing to know is that all of the top pot stocks have seen worse declines than what they're experiencing right now. You don't even have to go back very far in time to see that this is true. Take a look at the following chart that depicts the percent off highs for the leading Canadian cannabis stocks in 2018. 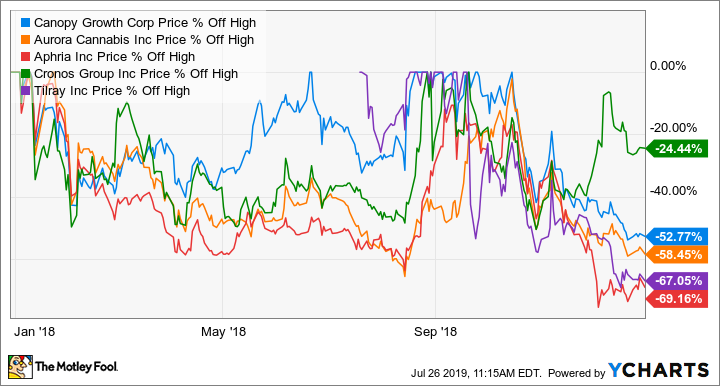 Except for Cronos Group, all four of the other top Canadian pot stocks ended last year more than 50% off of their high levels. And during part of the year, Cronos was more than 40% off of its highs. Every one of the biggest five Canadian cannabis producers by market cap experienced a steeper decline in 2018 than it's had in 2019.

But there's also something else you need to know. Three of the five top stocks -- Canopy Growth, Aurora, and Cronos -- are still up by close to 30% or more so far this year despite the big declines in recent months. Aphria is down year to date, but only by a little. Tilray is the only member of the "big five" to be experiencing a tough 2019.

Let's set aside the stock gyrations for a minute. The reality is that the long-term prospects for Canopy Growth, Aurora, Cronos, Tilray, and Aphria haven't changed.

Sure, the Canadian adult-use recreational market has experienced some growing pains. Retail locations haven't opened as quickly as hoped. Supply constraints have been problematic. But these are temporary issues. As far as I know, no industry observer has slashed his or her long-term projections for the Canadian cannabis market.

If these predictions are even close to being in the ballpark of how big the cannabis market will be, there's a pretty good case to be made that the pot stock bubble hasn't burst because there was no bubble in the first place. A stock bubble, by definition, occurs when stock prices rise well above their true values. The top Canadian cannabis producers arguably haven't been overvalued based on the potential market size.

Take Canopy Growth, for example. It's by far the biggest cannabis stock in terms of market cap. Let's assume that Canopy could capture 10% of a global cannabis market that rakes in $75 billion annually by 2030. Using a price-to-sales multiple of five, Canopy should have a market cap of more than $37 billion if it generated annual revenue of $7.5 billion. The company's market cap today is around $12 billion.

By the way, even though George thinks there was a marijuana stock bubble and that it has now burst, he still has a favorable view of the industry's long-term prospects. He wrote, "The legal marijuana industry has clearly started down the path toward 'big weed' -- a powerful trend that will probably prove to be irreversible." He's exactly right.

There are legitimate concerns that the global cannabis market might not grow as quickly as analysts expect. It's possible that the U.S., which ranks as the largest cannabis market in the world, might not change federal laws in a way that enables the top Canadian cannabis producers to enter the U.S. market.

I don't blame investors one bit for being apprehensive about the leadership of some of the cannabis companies. Canopy Growth co-CEO Bruce Linton was shown the door in part because he didn't focus enough on the bottom line for Canopy's big partner and shareholder, Constellation Brands. Aphria CEO Vic Neufeld gave up his executive position after his company battled allegations of drastically overpaying for an acquisition. CannTrust severed ties with CEO Peter Aceto after the company came under fire for growing cannabis in unlicensed rooms.

These issues, along with worries that the Canadian recreational marijuana market isn't expanding as fast as anticipated, have contributed to a general malaise affecting pot stocks. But this malaise won't last forever. If history is a guide, it won't even last very long.