Renewable energy is an important and growing opportunity, but what price are you willing to pay to be involved?

Renewable power is displacing older technologies in the electricity market, and it's a trend that has a long way to go. Because Enphase Energy (ENPH 4.17%) supplies key technology to the solar panel industry, it's no doubt poised for a bright future. But a great business isn't always a great stock. Here's what you need to know to decide if Enphase Energy is a buy today.

A key supplier to a growing market

Enphase isn't exactly a front-line name in the solar industry. The microinverters it makes are just one, albeit extremely vital, part of the final product. However, as one of the largest suppliers of microinverters in the world, it plays a big role in the solar panel space. There's huge growth ahead for the industry as a whole. The U.S. Energy Information Administration (EIA), for example, projects that solar's share of the U.S. renewable power space will expand from 13% in 2018 to nearly 50% by 2050, surpassing all other renewable energy sources as renewable power's share of the overall grid expands from 18% to 31%. These are just the projections for the U.S. grid, and this trend is a worldwide phenomenon.

Early in its life, Enphase grew quickly but lacked financial and operational discipline. It hit a wall in 2016 and had to step back to focus on more than just the technology. That included bringing in a new CEO, as well as becoming more disciplined on the sales and production sides of the business. With a new emphasis on profitability, the company turned in a strong 2018. Revenue advanced 10%, and adjusted earnings went from a loss of $0.25 a share in 2017 to a profit of $0.10 a share in 2018 (driven largely by a strong fourth quarter). That upturn continued into the first quarter of 2019: A revenue advance of 8.5% year over year, combined with improved margins, led to a 100% increase in adjusted earnings.

With huge growth opportunities ahead for solar power and a business that appears to have found its footing operationally, there's a lot to like about Enphase today.

The problem is that investors are well aware of the positives taking shape today. The stock has risen roughly 350% so far in 2019. That's an incredible advance in a very short time. For comparison, the S&P 500 index is "only" up 19%. Investors need to step back and consider the risk-reward trade-off, and note the very real possibility that Wall Street has gotten ahead of itself. 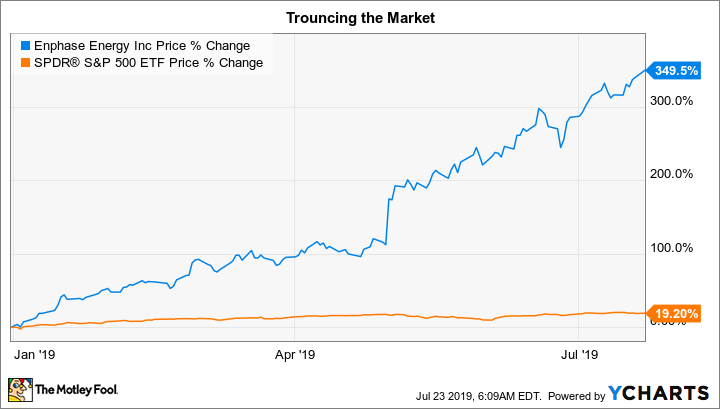 Ultimately, valuation matters. To paraphrase Wall Street legend Benjamin Graham (the man who trained Warren Buffett), paying too much for a great company can lead you to make a bad investment. Since Enphase hasn't been consistently profitable, price-to-earnings isn't much of a guide. Which leaves price-to-sales as a primary valuation key metric...and the picture isn't pretty. The company's five-year average P/S ratio is around 1.1. That metric currently sits at roughly 6.5 based on trailing 12 months revenues. An acquisition in 2018 and the company's improved financial performance suggest that the company deserves a higher P/S valuation, but the increase in that metric is massive. It's clear that that the future looks brighter and that investors are well aware of that fact. This isn't the only metric that suggests Enphase is expensive today.

Although the historical P/E isn't much of a guide here, it's worth considering the forward P/E, which looks at the price relative to earnings projections. Currently Enphase has a forward P/E of over 50. While that's not as outlandish as the metric could get (Netflix has a forward P/E of 90), it's still a huge number. It prices in a lot of success. If Enphase should fall short of Wall Street's expectations, the stock would be likely to fall hard and quickly.

There's no question that Enphase Energy has turned an important corner. And so long as it keeps on track, the solar industry supplier should have a very good 2019. However, investors have seen this good news and bid the stock up to what appear to be extreme heights. Equally troubling is the fact that the upturn has transpired over a very short time, which suggests Wall Street is paying more attention to the story than the underlying numbers. With high expectations built into the stock price, most investors would be better off sitting this one out.