Snap (NYSE:SNAP) returned to growth in a big way in the second quarter, buoyed by a new Android app that helped user growth surge 8% year over year while notching its biggest sequential user gain in nearly three years.

That it also reported a much narrower loss than analysts expected indicates the Snapchat operator may have found its stride once more. Yet as powerful as these results were in pushing Snap's stock higher, a big, one-quarter improvement is not a trend, and now the social media specialist needs to prove this was more than just a fluke. 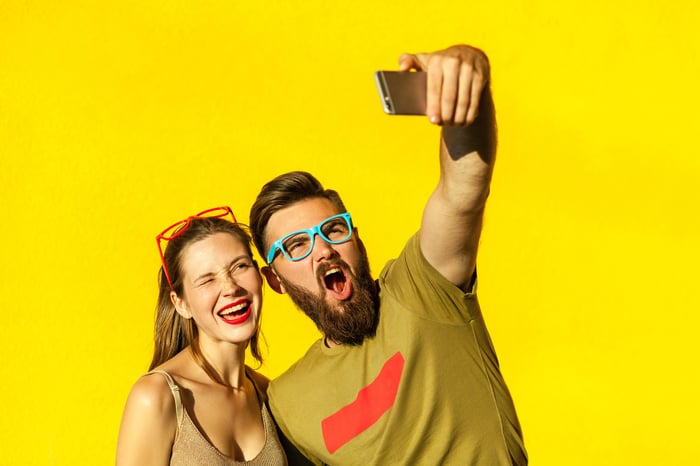 The change everyone was looking for

Snap CEO credits the outstanding results to numerous changes that have been implemented recently, including rebuilding the Android version of Snapchat and creating a self-serve portal for advertisers.

Although the app redesign had to be overhauled several times to finally produce an experience that users could tolerate, the self-serve advertising platform similarly created an internal tumult, because while it increased usage, it also reduced Snap's revenue as ad prices tumbled. The company that had been on track to hit $1 billion in ad revenue by 2018 suddenly saw that potential stretched out to 2020.

The biggest change, though, was finally releasing the new Android version of Snapchat after so many delays. The new app allows it to potentially capture hundreds of millions of users. That it was able to attract 13 million new users this quarter when analysts were only expecting 2 million suggests it was Android that Snap had been missing.

Certainly investments in Snap Originals programming, adding a gaming platform, and improving its augmented reality (AR) lens technology are all things that would help make Snapchat a more enjoyable experience. All of these factors contributed to Snap's growth. But because Android has greater global penetration than iOS, and there was a huge influx of new users unlike what the company has seen in years, it suggests the Android rebuild accounted for most of the gains.

Fun tools may keep them around, but adding a new access point for potentially hundreds of million people is what will let them discover the tools.

Perhaps just as important for Snap was group revenue rising 48% to $388 million as advertising sales increased, handily beating analyst expectations of almost $361 million. Advertisers appreciate Snap investing in AR because it increases engagement by users, and as CEO Evan Spiegel noted, it "meant that we were better able to monetize this increased engagement, leading to accelerating revenue growth."

The company was able to report adjusted EBITDA of negative $78.7 million, far better than its forecast of negative $125 million to negative $150 million. As a result, Snap posted adjusted net loss of $82.2 million, or $0.06 per share, a significant improvement over last year's $0.27-per-share loss and ahead of analyst estimates of a loss of $0.10 per share.

Now Snap is guiding third-quarter revenue to be between $410 million and $435 million, also ahead of Wall Street's guess of $403 million, with adjusted EBITDA of between negative $60 million and negative $85 million. It's looking for daily active users to rise to between 205 million and 207 million.

It's quite possible Snap is being very conservative in its estimates of user growth next quarter, because with the new Android app and AR lenses providing a more gratifying user experience, Snapchat could become a popular destination for storytelling once more.