While the focus on Tesla (NASDAQ:TSLA) is primarily with the company's electric-car sales (and rightly so, since they account for the bulk of the business), investors shouldn't overlook its fast-growing energy storage segment.

The nascent energy storage business had a rare chance to grab some headlines on Monday when Tesla announced a new battery system called Megapack, designed to address the needs of utility grids. The Megapack system will help Tesla build on its early momentum in the important energy storage space. 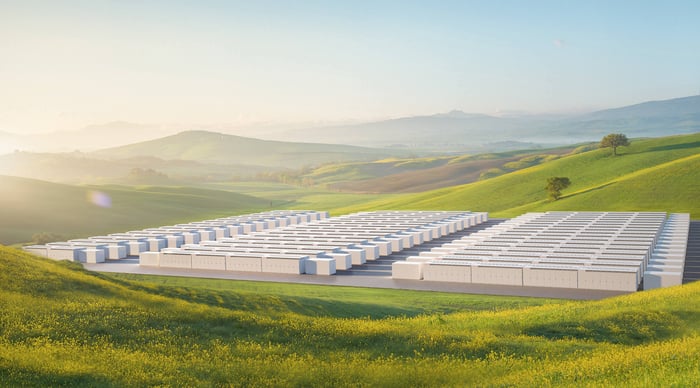 A rendering of a large-scale deployment of Megapacks. Image source: Tesla.

Tesla's Megapack is a new battery product designed and engineered "specifically for utility-scale projects," the company said in a blog post on Monday.

The energy storage unit is a significant upgrade from Tesla's Powerpacks, which had a 210 kilowatt-hour capacity. The company announcement said: "Megapack significantly reduces the complexity of large-scale battery storage and provides an easy installation and connection process. Each Megapack comes from the factory fully assembled with up to 3 megawatt-hours (MWhs) of storage and 1.5 MW of inverter capacity, building on Powerpack's engineering with an AC interface and 60% increase in energy density to achieve significant cost and time savings compared to other battery systems and traditional fossil fuel power plants."

This will make projects like the 129 megawatt-hour battery storage Tesla installed in Australia in late 2017 much easier to deploy, as the company says that Megapack installation will be 10 times faster than the installation of its older Powerpack energy storage product for utilities.

Tesla's energy storage segment is growing rapidly. In Q2, it deployed 415 megawatt-hours of energy storage capacity, up 81% year over year. In addition, management said its residential energy storage solution, called a Powerwall, is now installed at over 50,000 different locations.

Today, the total footprint of Tesla's energy storage products represents a cumulative capacity of over 2 gigawatt-hours -- and the company believes its launch of Megapack will help this number "accelerate exponentially in the coming years."

Now Tesla just needs demand to keep growing -- something the launch of a new and improved energy storage product may help along.