Amgen (NASDAQ:AMGN) recently reported second-quarter results that blew past consensus estimates on the top and bottom lines. The company's mature product line is still losing ground thanks to losses of exclusivity, but that didn't stop recent share buybacks from raising earnings by a few percentage points.

If there were awards for growing your bottom line after your best-selling brands lose exclusivity, Amgen's trophy case would be full of them. Sliding sales of Neulasta, Neupogen, and Sensipar pulled total revenue down by a combined $601 million, but the company still raised earnings per share by repurchasing heaps of those shares over the past year.

Amgen didn't report any huge gains from any single brand. Instead, there was encouraging growth from around a dozen drugs with a lot more patent-protected market exclusivity, including Enbrel. The anti-inflammation treatment launched decades ago, but second-quarter sales still grew 5% to $1.36 billion.

Enbrel sales rose thanks to a higher net price, while sales of all of the following products experienced increased demand: 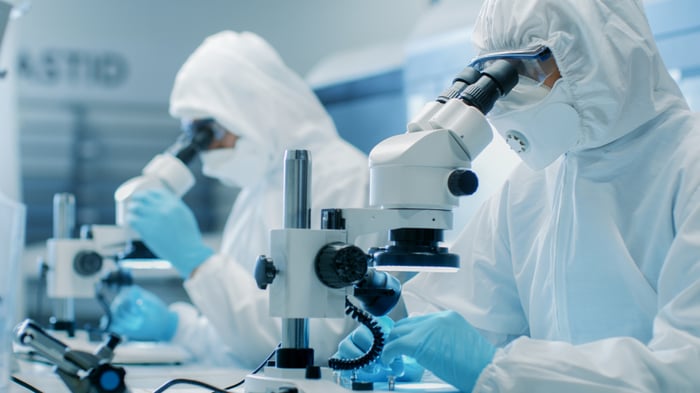 Robert A. Bradway, Amgen's CEO, was pleased to report increasing demand for drugs on the market and candidates in development: "With our newer products generating strong volume gains globally and many first-in-class medicines advancing through our pipeline, we are well positioned to serve patients and deliver long-term growth for our shareholders."

The most exciting first-in-class drug in Amgen's pipeline is AMG 510, an oral cancer treatment that inhibits out-of-control KRAS proteins so they can't accelerate an array of different malignancies. The company has a registrational study slated for later this year, and investors want to keep an eye on a potential contender that Mirati Therapeutics is testing in a human proof-of-concept study.

Amgen didn't change the high side of any forward expectations, but management did raise the lower ends of guided ranges provided three months ago. Total revenue is expected to fall in a range between $22.4 billion and $22.9 billion, and adjusted earnings are headed for a range between $13.75 per share and $14.30 per share.

Sliding sales of Neulasta and others have crimped profit growth, but Amgen's operations still generated an impressive $9.7 billion in free cash flow over the past 12 months. Amgen only needs 36% of trailing free cash flow to make payments on a dividend that currently offers a 3.2% yield.

The company has raised its payout a stunning 418% over the past decade. If Aimovig and Parsabiv and AMG 510 continue exceeding expectations, the next 10 years could work out even better for shareholders.