Summer is rarely kind to biotech stocks. However, this class of equities often starts to regain its footing in the month of August, thanks to a bevy of earnings reports.

Which biotech stocks are in the best position for a strong August? The gene therapy company Adverum Biotechnologies (NASDAQ:ADVM) and the orphan drug company Catalyst Pharmaceuticals (NASDAQ:CPRX) are two prime candidates. Here's why investors might want to consider buying these two small-cap biotech stocks next month. 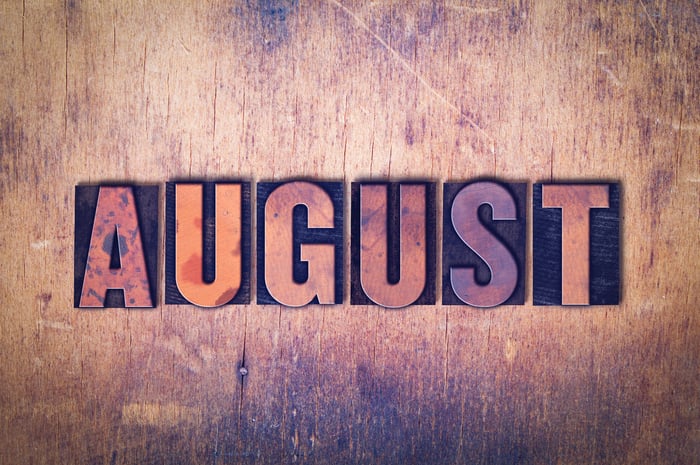 Despite shooting up by a breathtaking 342% this year, the gene therapy specialist Adverum Biotechnologies could have a lot more room to run. Adverum's shares have been skyrocketing this year in response to growing excitement about the company's experimental gene therapy ADVM-022, indicated for a high-value eye disease known as wet age-related macular degeneration (AMD).

The headline is that wet AMD therapies currently generate a gob-smacking $10 billion in annual sales. Even so, there is a well-documented medical need for a so-called "one and done" therapy to increase compliance among the elderly. Adverum's ADVM-022 could be the ticket.

ADVM-022 is a single intravitreal injection designed to deliver sustained therapeutic levels of an antivascular endothelial growth factor (VEGF) protein. The therapy is presently in an early-stage trial dubbed Optic. So far the company has reported observing a "robust preliminary anatomical response and no serious adverse events" in Optic's first cohort of patients.

Why is this high-flying biotech stock still worth buying in August? The big draw here is the upcoming 24-week outcomes data slated to be discussed at the 52nd annual Retina Society meeting this September. As these interim data could provide significant insight into the therapy's safety and efficacy, Adverum's shares appear poised to continue their recent surge heading into this all-important clinical update.

Catalyst Pharmaceuticals, a small-cap rare disease specialist, started the year off on an incredible run due to the highly successful commercial launch of its adult-use Lambert-Eaton myasthenic syndrome (LEMS) drug Firdapse. Then disaster struck. Last May, the Food and Drug Administration (FDA) surprisingly approved a rival medicine called Ruzurgi for use in LEMS patients between the ages of 6 and 17, causing Catalyst's shares to crumble in the blink of an eye.

The FDA's approval came as a shock to Catalyst and its shareholders alike because drugs indicated for rare diseases like LEMS come with a built-in seven-year period of exclusivity under the Orphan Drug Act of 1983. While the FDA appears to have worked around this well-established ground rule by approving Ruzurgi exclusively for children, the fact remains that this alternative LEMS drug can be prescribed off-label for adults. The agency also granted this regulatory approval without requiring its manufacturer, Jacobus Pharma, to conduct a costly late-stage trial in its intended patient population, another unprecedented move by the FDA.

Over the past month, Catalyst's shares have started to rebound in response to the company's decision to file a federal lawsuit against the FDA. On June 12, Catalyst filed a suit against the agency and related parties alleging that Ruzurgi's approval violates Firdapse's statutory rights to orphan drug exclusivity and new chemical entity exclusivity under the Federal Food, Drug, and Cosmetic Act. While it remains to be seen how this legal challenge will pan out, Catalyst seems to have a strong case for a few reasons.

Chief among them is the fact that Ruzurgi's approval arguably sets a rather problematic legal precedent for the entirety of the orphan drug industry. In effect, the whole point of the orphan drug act is to spur the development of treatments for rare diseases that would otherwise be commercially unpalatable due to their extremely small patient populations.

Viewed this way, the FDA's decision to undercut Firdapse's commercial opportunity seems to run counter to the spirit of the Orphan Drug Act, as it essentially creates a backdoor that allows knock-off therapies to gain market access while an approved orphan drug should still be protected from competitors. Such a development would render one of the key components of the Orphan Drug Act -- extended period of market exclusivity -- effectively moot.

So while the FDA seemingly had a good intention (to lower the cost of treatment) when it approved Ruzurgi, this landmark regulatory decision could turn out to have wide-ranging ramifications for the industry as a whole by significantly lowering the incentive to develop lifesaving medicines for rare diseases. Catalyst, for its part, appears intent on making this rather powerful argument to the court.

Why should investors buy Catalyst in August? The company is expected to release its second-quarter earnings during the first week of the month, giving investors the first hard data points on Ruzurgi's impact. As Wall Street hasn't issued any major changes to Catalyst's annual revenue guidance since this unexpected hiccup, there's a good chance that the company will at least meet consensus for the prior three-month period. That's a big deal from a valuation standpoint.

After all, Catalyst is currently trading at around 1.27 times the company's projected 2024 sales, a rock-bottom valuation for a high-growth orphan drug company. A more typical valuation is something along the lines of eight times forward-looking sales. Catalyst's recovery could thus get a big boost from this upcoming earnings report. In turn, investors comfortable with risk may want to give this undervalued biotech stock serious consideration in the run-up to this potential catalyst.