One tech powerhouse pleased investors tonight, while one left them wanting.

How did they do? I'm glad you asked. 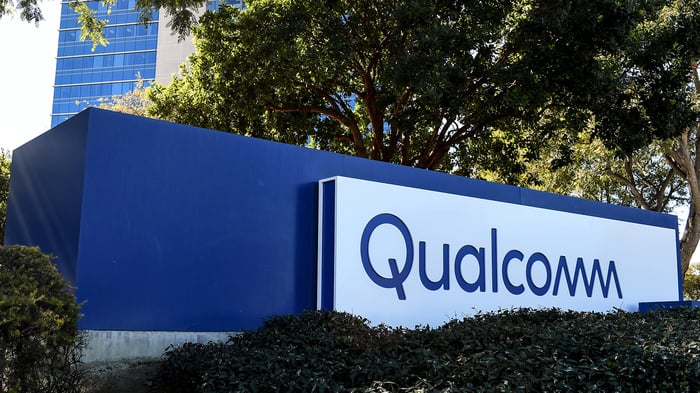 Qualcomm is one of the top decliners among major stocks in tonight's after-hours trading after it unveiled its Q3 of fiscal 2019 figures.

The company didn't meet expectations on the top line. All told, for the quarter Qualcomm booked non-GAAP (adjusted) revenue of $4.9 billion, which was 13% lower on a year-over-year basis. That figure did not include recognition of revenue deriving from a large legal settlement with Apple. (In April, Qualcomm and Apple settled their long-running dispute over patent licensing.)

Collectively, analysts who track the stock were modeling just under $5.1 billion in revenue and $0.75 in per-share adjusted net profit.

Qualcomm said that the quarter saw reduced demand for 4G products in advance of the coming shift to 5G. It said that its efforts in the latter technology leave it "extremely well positioned as 5G ramps in early calendar year 2020."

The problem is, the 5G opportunity and the peace treaty ending the Apple war aside, there's still the rest of 2019 to consider. The company proffered Q4 guidance that fell well below analyst expectations, due largely to uncertainty over Huawei, a company that's a major focus of U.S.-China trade disagreements.

With that in mind, Qualcomm is projecting $4.3 billion to $5.1 billion in revenue and adjusted EPS of $0.65 to $0.75 for the quarter. Prognosticators had expected significantly better performance -- they were modeling over $5.6 billion on the top line and $1.08 in adjusted EPS.

Qualcomm stock is down by 5% in trading tonight.

A stock headed in the opposite direction is Western Digital, which is trading slightly higher on the back of modestly encouraging guidance and hopes that one of its key markets is about to improve.

For the quarter, Western Digital's sales were $3.63 billion, and its adjusted net profit was $50 million ($0.17 per share). Both numbers were quite some distance down from Q4 2018's $5.1 billion and $1.1 billion profit ($3.61), respectively. Still, the company met the collective analyst estimate of $0.17 for earnings per share, and wasn't far off the $3.66 billion revenue projection from those forecasters.

The significant drops were due to extreme softness in Western Digital's fiscal year in the market for flash memory, of which it is a major supplier. The company believes that the segment has "reached a cyclical trough," and will improve notably.

These numbers are generally within analyst estimates. That, plus the optimistic pronouncement about the flash market, seems to be infusing the stock with cautious optimism this evening. It's currently trading up by 2%.