Please ensure Javascript is enabled for purposes of website accessibility
Free Article Join Over 1 Million Premium Members And Get More In-Depth Stock Guidance and Research
By Matthew DiLallo - Jul 31, 2019 at 11:19AM

The diversified materials maker remains on track to break up within the next year.

Eagle Materials ( EXP -1.08% ) faced a few headwinds during its fiscal first quarter that negatively impacted its results. Not only did challenging weather conditions dampen cement demand, but it also experienced a shift in customer buying activity due to the timing of a price increase. Despite those issues, the company's outlook for the balance of the year remains positive.

The weather, as well as several other issues, weighed on Eagle Materials' results. 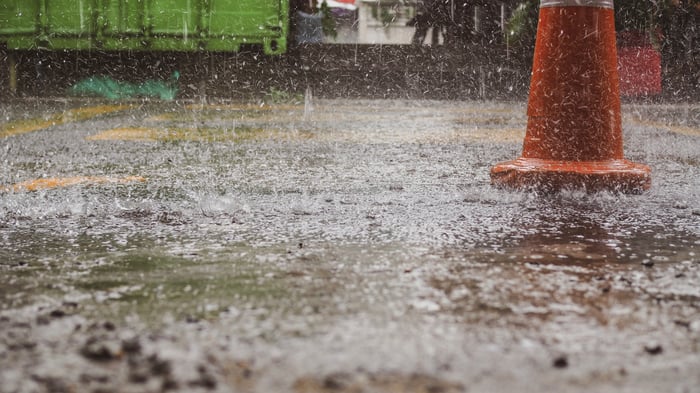 About the quarter, new CEO Michel Haack said, "Our cement sales volume was up 3% to a record 1.6 million tons in the first quarter despite challenging weather conditions and was considerably stronger during periods when the weather was favorable. Market demand for our wallboard also remained healthy when adjusted for a shift in the timing of our price increases and related buying activity."

As Haack points out, the company battled weather issues and timing during the quarter, which weighed on its results. Flooding in the Midwest, for example, disrupted transportation routes to many of its cement markets, which caused delays and increased costs. It anticipates that some of this disruption will continue into the fall.

Despite those weather-related headwinds, Eagle Materials' "outlook for the remainder of the year continues to be positive," stated Haack. The CEO noted that "demand for our products is supported by a number of favorable market dynamics including ongoing growth in jobs and wages, high consumer confidence, and low interest rates."

Eagle Materials announced earlier in the quarter that, as a result of its strategic review, it planned to break up the company. It intends on separating its heavy and light materials businesses into two independent, publicly traded companies. The aim is to spin them off to shareholders by the first half of calendar 2020. The company is also actively pursuing alternatives for its oil and gas proppants business. In the meantime, the combined company continues to generate free cash flow, which it's using to buy back stock. It repurchased nearly 5% of its outstanding shares during the quarter, returning more than $200 million in cash after adding in the dividend.

Eagle Materials Ends Its Fiscal 2019 on a Sour Note