It's been a rough year for The Meet Group (NASDAQ:MEET), bucking the trend of generally buoyant social media stocks in 2019. The company behind MeetMe, Skout, and other social discovery and online dating platforms has been weak since a New York Post article detailed concerns about behavior that was risque (if not illegal) on its live-streaming platforms. The Meet Group defended its user safety position, but now the shares are taking another hit after the company posted a disappointing financial report.

Revenue rose 22% to hit $52 million in the second-quarter results announced on Wednesday morning, ahead of the $50.3 million to $51.4 million it was forecasting for the period back in May. Adjusted EBITDA and earnings rose even higher. The Meet Group's adjusted net income of $0.11 a share landed just ahead of the $0.10 that analysts were expecting.

The deal breaker for investors came in The Meet Group's guidance. It's eyeing $50.5 million to $51 million on its top line for the current quarter, leading investors to wonder if the sequential decline in revenue is the result of seasonality or something more problematic. 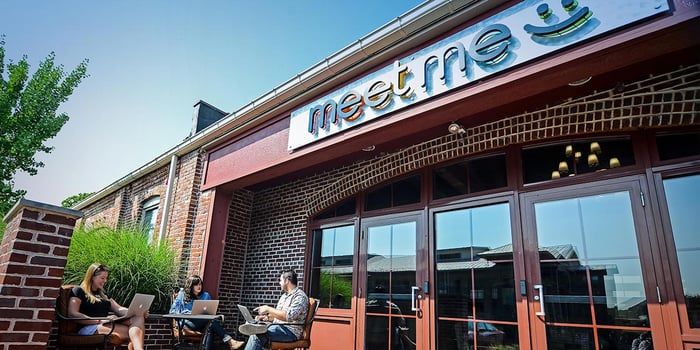 Live video has been a game changer for some social discovery hubs and online dating sites, and The Meet Group is riding that wave. There are now 892,000 active video users, more than a fifth of its total users on apps where live-streaming is available.

This isn't an easy niche to monetize. Average video revenue per daily active video user clocked in at a mere $0.26 for the entire quarter, but the trend is improving noticeably. The metric stood at just $0.15 per user for the second quarter of last year. Getting folks to pay for virtual currency that they can use as gifts for other members or to enhance their visibility is the name of the game for The Meet Group. User pay revenue soared 44% in the second quarter, accounting for a beefy 71% slice of the revenue pie. Strength in user pay revenue is helping offset a dip in the online advertising revenue that was once its bread and butter.

This is the third quarter in a row in which the stock took an initial hit on earnings, and investors have a right to be concerned about the soft guidance. The Meet Group's guidance for the third quarter last year called for an increase, so we can't pin the tail on the seasonality donkey. The fear here is that the popularity of its apps is either stalling or retreating, and this brings us back to the knocks raised by The New York Post last month. The article claimed that MeetMe was becoming a place for porn and prostitution, and that the App Store was investigating to see if it would boot the dating site.

The Meet Group defended its platform, pointing to the human and tech filters that are actively patrolling the live content on its app. Analysts at Canaccord and Oppenheimer also rushed to The Meet Group's defense. MeetMe is still readily available on the App Store more than five weeks after the initial report, but this doesn't mean that it's out of the woods just yet.

The Meet Group's third-quarter guidance calling for a sequential revenue dip is short of what analysts were modeling. We've seen social media stocks bounce back from sequential dips -- it's at the heart of this year's biggest large-cap winner -- but now The Meet Group has to prove that it's better than its guidance. It's back in the market's doghouse, and that's a place that no virtual currency can buy its way out of these days.