Shopify reported another quarter of strong growth, while Qualcomm sees challenges ahead.

Major benchmarks were on their way to a day of decent gains when President Trump announced a new round of tariffs on Chinese goods, and the market reversed itself in a hurry. The Dow Jones Industrial Average (^DJI 1.49%) and the S&P 500 (^GSPC 1.59%) lost around 1%. 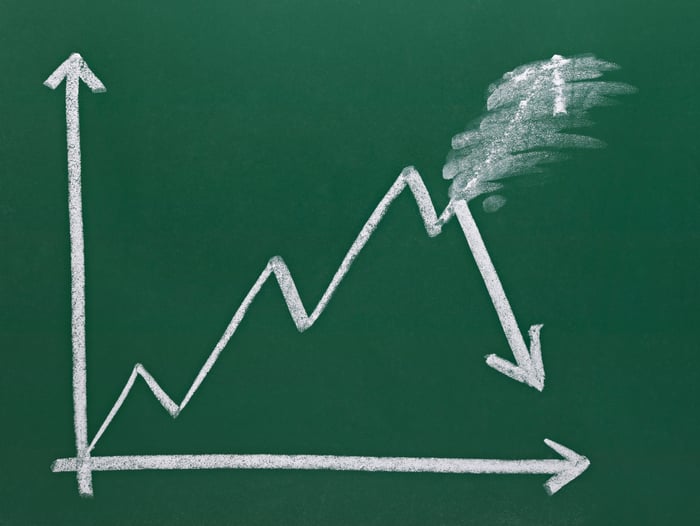 Shares of Shopify soared 7.4% to an all-time high after the e-commerce platform specialist announced second-quarter results that blew past expectations. Revenue increased 48% to $362 million, well above the company's guidance of $345 million to $350 million. As reported under generally accepted accounting principles (GAAP), operating loss was $39.6 million, compared with guidance for a loss of $46 million-$48 million. Adjusted net income, which ignores the very real business expense of stock compensation, was a profit of $0.14 per share, while analysts were expecting $0.03 per share on that basis.

Gross merchandise volume -- the value of orders processed on Shopify's platform -- grew 51% from the period a year ago to $13.8 billion and was up 16% from last quarter. About $5.8 billion in payments for that merchandise flowed through the company's Shopify Payments service.

Shopify's momentum should continue, with the company rolling out new services like the Shopify Fulfillment Network and focusing on international expansion. It raised guidance for full-year revenue and forecast third-quarter revenue between $377 million and $382 million, exceeding the analyst consensus estimate of $374 million.

Qualcomm is downbeat about 2019

Qualcomm reported mixed results for its fiscal Q3 and issued disappointing guidance for next quarter, and shares slumped 2.7%. Revenue adjusted to exclude the $4.7 billion payment received from the settlement with Apple rose 13% to $4.9 billion, missing the $5.1 billion analysts were expecting. Adjusted earnings per share fell 20% to $0.80 but nevertheless beat expectations of $0.75.

Qualcomm said on the conference call that it saw weakening demand for 4G chips as its customers shift their priorities to 5G. The company said that the rollout of the new technology is happening at a much faster pace compared to the launch of 4G, and customers are working through their existing inventory of 4G chips. The number of design wins for 5G have doubled since last quarter, which should bode well for revenue in 2020, but in the meantime, Qualcomm decided to lower its estimates for global smartphone shipments in calendar 2019 by 100 million units.

Guidance for Q4 revenue, also impacted by uncertainty about Huawei sales, was $4.3 billion to $5.1 billion, compared with the analyst consensus of $5.7 billion.