Dentsply Sirona (XRAY 1.98%) has been on a roll so far in 2019. Its stock was up 46% by the end of July. The company also announced first-quarter results in May with solid adjusted earnings per share (EPS) growth.

Investors hoped Dentsply Sirona's roll would continue when the company announced its second-quarter results before the market opened on Friday. Here are the highlights from the dental solutions provider's Q2 update. 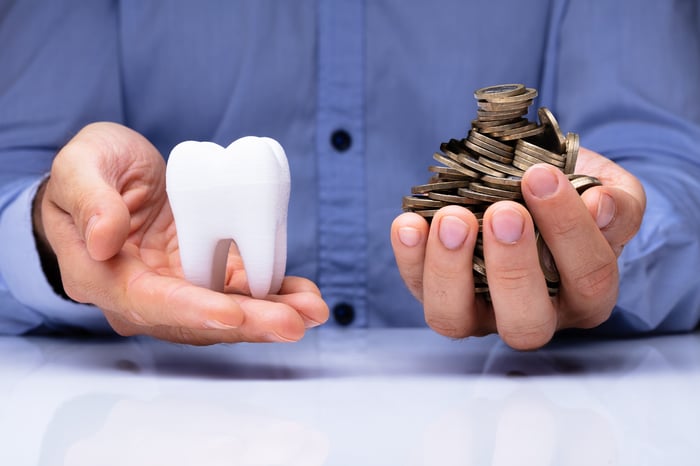 Dentsply Sirona reported that its revenue in the second quarter declined 3.1% from the prior-year period to $1.01 billion. This number came in a little below the consensus Wall Street analysts' revenue estimate of $1.04 billion.

Under generally accepted accounting principles (GAAP), Dentsply's net income in the second quarter was $36.4 million, or $0.16 per share. This reflected a big improvement from the prior-year period GAAP net loss of $1.12 billion, or $4.98 per share.

The company announced adjusted earnings per share of $0.66 in the second quarter, marking a 10% year-over-year increase. It also beat the average analysts' adjusted EPS estimate of $0.63 per share.

That year-over-year revenue decrease wasn't quite as bad as it looks at first glance. Adjusting for foreign exchange fluctuations, acquisitions, and discontinued products, Dentsply Sirona generated 3% year-over-year revenue growth. The company refers to this as its "internal sales growth" rate. CEO Don Casey said that this 3% internal sales growth was in line with the target the company provided in November 2018.

The huge improvement in GAAP net income stemmed primarily from a $1.09 billion goodwill impairment recorded in the second quarter of 2018. However, Dentsply Sirona also announced slightly lower selling, general, and administrative expenses in Q2 than it did in the prior-year period. In addition, the company's restructuring costs in the second quarter were much lower than a year ago.