Please ensure Javascript is enabled for purposes of website accessibility
Log In Help Join The Motley Fool
Free Article Join Over 1 Million Premium Members And Get More In-Depth Stock Guidance and Research
By Matthew Frankel, CFP® – Aug 2, 2019 at 8:17AM

The money-sending company's stock is up 76% in just two months, but is there more room to climb?

MoneyGram International (MGI 0.00%) has taken investors on quite the roller-coaster ride in recent months. In mid-June, the company's stock spiked by more than 150% on reports that a certain cryptocurrency company had acquired a stake, but the excitement seems to have cooled off. As of the end of July, MoneyGram had given back roughly half of its gains, but is still up by more than 76% over the past two months.

With that in mind, here's a rundown of the big news story that sent MoneyGram's stock skyrocketing, the company's recent business results, and whether the company looks like a buy at its current price. 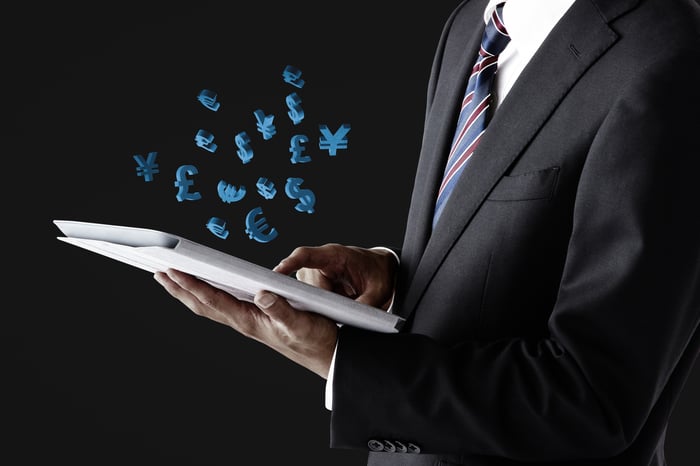 As part of the deal, Ripple announced that it is investing as much as $50 million into MoneyGram in exchange for a stake in the company as well as warrants to buy even more MoneyGram stock within the next two years. A few weeks after the transaction, Ripple reported owning a 9.95% stake in the payments company.

The other major part of the deal is that MoneyGram will use Ripple's cryptocurrency, formally known as XRP, as well as Ripple's xRapid platform, to settle transactions. The two companies had been testing a pilot program since 2018, and apparently Ripple likes how it has been going.

Why it's such a big deal for MoneyGram and its investors

There are two reasons why the Ripple news sent MoneyGram's stock price soaring. First and foremost is the valuation at which Ripple is investing. Ripple's $30 million investment involved buying roughly 5.6 million shares of MoneyGram for $4.10 per share and gives it warrants to buy 1.7 million additional shares of MoneyGram stock at the same price -- which happens to be roughly three times the price MoneyGram was trading for before the announcement and 67% higher than the current share price as of this writing.

Additionally, Ripple has an agreement to buy as much as $20 million worth of additional stock for at least $4.10 per share. So it's fair to say that Ripple sees significant upside potential if the partnership goes well.

Second, the use of Ripple could be a big money-saver. Historically, MoneyGram has had to use foreign exchange marketplaces when it comes to transaction settlements. This is a costly and capital-intensive practice, as it requires MoneyGram to spend large amounts of money to buy foreign currencies. To illustrate this, consider that at the end of the first quarter of 2019, MoneyGram carried over $3.4 billion in "settlement assets" on its balance sheet.

The switch to Ripple is intended to lower operating costs and capital requirements, which could allow MoneyGram to operate far more efficiently, while producing no noticeable difference in the service MoneyGram provides to its customers.

Should you buy MoneyGram International now?

There's certainly an argument to be made that this partnership could be a game changer for MoneyGram International. As I mentioned, MoneyGram has had to settle transactions in a relatively inefficient manner and spent $161 million on commissions and direct transaction expenses in the first quarter of 2019 alone. Since the company ran at a net loss of $13.5 million for the quarter, it's easy to see how significantly reducing its transaction and settlement expenses could mean the difference between losses and major profitability.

Having said that, it's important to realize that MoneyGram is a micro-cap company (its current market cap is about $138 million), and that the actual benefits of the Ripple partnership remain to be seen. So, this remains a highly speculative investment. If you believe in the cross-border transaction potential of cryptocurrencies, especially Ripple, and want to take a bit of a gamble, MoneyGram could be a smart buy for you. Just don't invest with any money you can't afford to lose.