Please ensure Javascript is enabled for purposes of website accessibility
Log In Help Join The Motley Fool
Free Article Join Over 1 Million Premium Members And Get More In-Depth Stock Guidance and Research
By Dan Caplinger - Updated Aug 2, 2019 at 10:58AM

The information management specialist keeps seeing record results, but it seems to be losing some of its momentum.

The cloud computing revolution has forced companies of all kinds to evaluate their technology needs, and information management specialists like OpenText (OTEX -2.45%) have been able to take advantage of soaring demand for the services they provide. Yet as with any high-growth business, cloud computing has drawn in a lot of competitors, and even as OpenText has implemented a long-term plan to keep itself among the leaders of the industry, it has started to see some signs of slowing growth.

Coming into Thursday's fiscal fourth-quarter financial report, OpenText shareholders wanted to see faster growth in some key areas of its business. Instead, OpenText's growth just about disappeared, with overall sales growth actually turning negative. As a result, it's possible that high-growth investors might be starting to lose interest in the information management company.

Signs of slowing at OpenText

OpenText's fiscal fourth-quarter results showed some cause for concern. Revenue of $747.2 million was down 1% compared to year-ago levels, falling well short of the modest growth that most of those following the stock were expecting to see. Net income climbed 17% to $72 million, but after extraordinary items were accounted for, adjusted earnings of $0.72 per share were flat from the previous year's fiscal fourth quarter. 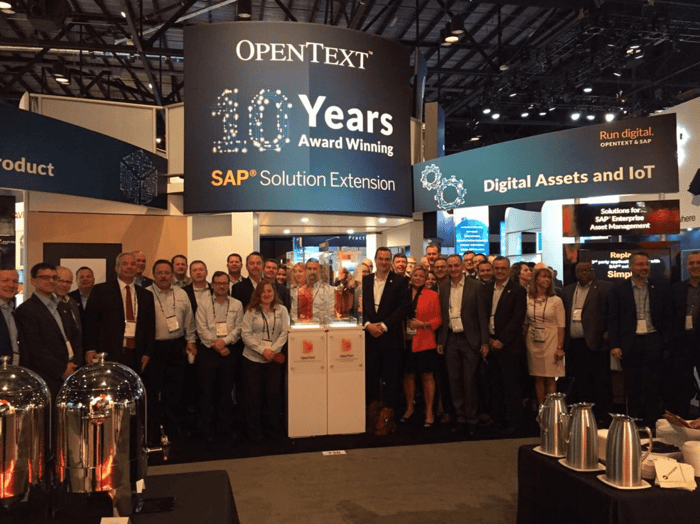 Some key growth rates within the business also slowed somewhat. Recurring revenue rose 4.2%, losing more than a percentage point from where the measure was three months ago. Revenue from cloud services and subscriptions rose at a healthier 11%, but that was down from 14% in the previous quarterly report. Customer support sales were down a fraction of a percentage point. Both licensing and professional services revenue declined by double-digit percentages year over year. Once again currency impacts weighed on the company, hurting sales figures by around 3 percentage points.

However, some of the news from OpenText was more encouraging. The information management specialist brought in 26 transactions worth $1 million or more, up from 20 three months ago. Half of those came from the OpenText cloud segment, while the other half dealt with work for clients at their physical premises. As we've seen before, OpenText got the most demand from the financial, consumer goods, services, technology, and public sector industries.

CEO Mark Barrenechea was happy with the company's results. "Fiscal 2019 was a momentous year for OpenText," Barrenechea said, and the CEO pointed to record cloud revenue as powering the business forward.

What's next for OpenText?

OpenText remained optimistic for the future. As Barrenechea put it, "Our expanded partnerships with [Alphabet's] Google and SAP and recently announced next generation product line, OpenText Cloud Edition, will help revolutionize the way businesses capture, govern, exchange, and use information in the cloud."

The company laid out its plan for how it hopes to keep growing. In its fiscal 2020 business model, OpenText will try to get slightly more of its overall revenue from recurring revenue sources, especially cloud services and subscriptions. That will come at the expense of customer support, which OpenText sees as more granular in nature and less reliable than the recurring sales it can generate elsewhere. Continued upward trends in margin levels and operating cash flow are goals for the information management specialist as well.

OpenText shareholders weren't entirely comfortable with some of the numbers that the company posted, and the stock fell 8% in premarket trading Friday morning following the Thursday afternoon announcement. It'll be important for OpenText to find ways to keep supporting its growth initiatives, because as some of its business metrics start to lose forward momentum, investors will grow less patient and want to see more signs that the company can sustain its leadership role in the cloud computing industry.

Dividend Investors Need to Add These Tech Stocks to Their Portfolio