For a long time, investors in construction project specialist MasTec (NYSE:MTZ) have focused on the company's exposure to the oil and gas industry. Low energy prices have hurt activity levels in the sector, and that in turn hurt MasTec's ability to do business there. As activity reappeared in energy, MasTec started to bounce back, but sluggishness in other parts of its business held it back to some extent.

Coming into Thursday's second-quarter financial report, MasTec investors were looking for the company to keep seeing an oil and gas rebound and get solid results elsewhere as well. MasTec's numbers were strong, and the construction company was confident enough about its future to raise its full-year guidance.

MasTec's second-quarter results were encouraging. Revenue jumped 20% to $1.94 billion, which was more than double the rate of growth MasTec achieved during the first quarter. Adjusted net income soared 46% to $122 million, and that produced adjusted earnings of $1.60 per share. That was quite a bit better than the consensus forecast among investors for just $1.12 per share on the bottom line. 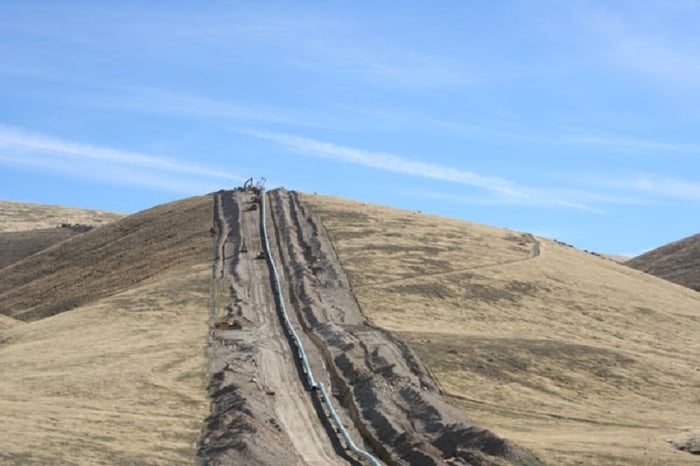 Revenue gains came across the board for MasTec's four main segments. Oil and gas took its place atop the group, with a 22% top-line jump for the segment, giving it almost half of MasTec's total sales. The power generation and industrial segment saw even better gains on a percentage basis, soaring more than 70% from year-ago levels. The electrical transmission business saw a 19% rise over the same period, and growth for the communications segment accelerated slightly to 5.5% year over year.

On the profit side of the equation, things were more mixed. Oil and gas adjusted pre-tax operating profit soared 46% and represented about three-quarters of MasTec's overall bottom line. Electrical transmission also did well, reversing a year-earlier loss with a modest gain. However, both communications and the power generation and industrial segment saw bottom-line declines, coming in at 29% and 9%, respectively.

Backlog figures were solid. The pace of growth slowed, up just $51 million in the past three months, but $7.8 billion of future business bodes well for MasTec's future.

MasTec is optimistic. As the CEO put it, "As we look beyond 2019, our diversified end markets continue to afford us multiple growth opportunities, and we believe investments made during 2019 to support growth will position us to maximize our future growth and financial performance."

That led MasTec to boost its guidance for the full year. The construction specialist now sees revenue coming in at $7.7 billion in 2019, which is $100 million higher than its previous forecast. The company made an even bigger boost to its earnings projections, raising its previous guidance by nearly $0.50 per share to $5.04. That would represent 34% growth over the full-year bottom-line figures for 2018.

MasTec shareholders seemed quite content with that set of results, and the stock climbed 6% in pre-market trading Friday following the Thursday afternoon announcement. With oil and gas construction activity rising back toward more normal levels, and with the rest of its business starting to fall into line as well, MasTec has a lot going for it, and the company's future looks bright.