You're not alone if you've never heard of John B. Sanfilippo & Son (NASDAQ:JBSS). John B. Sanfilippo & Son, or JBSS for short, is a processor and distributor of various types of nuts and dried fruit products. Founded in 1922 by Gaspare Sanfilippo and his son, the company is still run by its namesake family. More importantly, the company has a track record of good financial results and paying healthy dividends year after year.

Nearly 100 years after it was founded, JBSS is one of the leading sellers of nuts in the United States. The company sources nuts from local farmers, prepares and packages the raw ingredients, and sells the finished products to wholesalers, supermarkets, and convenience stores. JBSS primarily markets its nuts under the Fisher, Orchard Valley Harvest, and Squirrel brands. 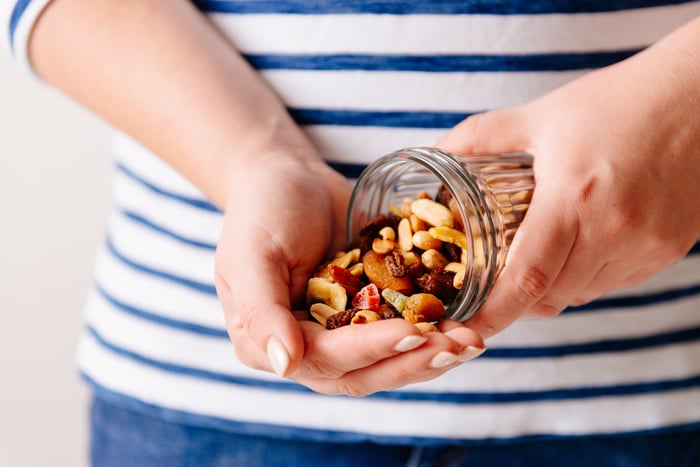 It turns out that selling nut products is a pretty good business, and it's remarkably consistent. Although its financial results have been somewhat muted over the last couple of years, over the long run, JBSS has seen respectable sales growth and profitability. In 2019, JBSS's market cap grew to about $981 million and its stock price is up 53.9% since the start of the year. 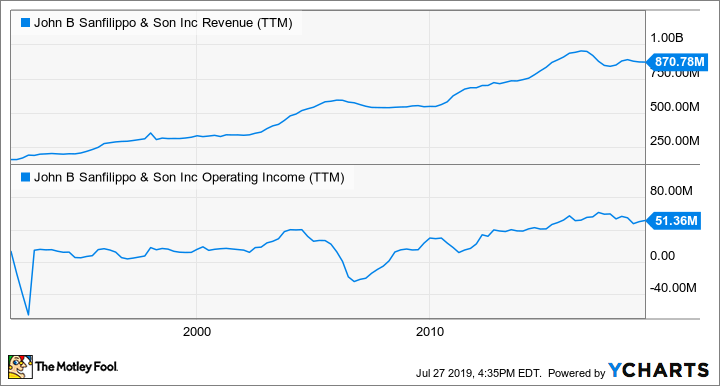 Selling nuts is just one of those businesses that's hard to screw up. Nuts are a food staple that will always find mass-market consumer demand. The nut crop may fluctuate from year to year, causing a change in commodity prices and impacting margins, but on average the nut business is stable and profitable.

As a company where the founding family still owns considerable stock and maintains positions of leadership, JBSS is conservatively run. After all, the namesake Sanfilippo family cares about its legacy. It's not interested in making risky acquisitions or taking on an excessive amount of debt. Instead, the company uses its excess cash flow to reward shareholders with dividends. The above graphic was a slide presented by JBSS at an investor meeting held in October 2018. It shows a strong track record of paying dividends to shareholders; that's provided a mid-single-digit annual yield, on top of appreciation in the underlying stock price.

John B. Sanfilippo & Son is an unusual company in today's stock market. Family stewardship and conservatively run companies were commonplace in the early and mid-20th century; however, most families have turned their companies over to professional CEOs or sold to larger enterprises.

Perhaps JBSS will follow that path at some point as well, but that doesn't appear to be in the cards anytime soon. Today, the chairman and CEO, COO, and several members of the board have familial ties. This organizational setup may strike some as nepotistic and possibly indicative of poor governance, but you don't see shareholders complaining. JBSS' stock price has had strong performance over the years, and the company has paid generous dividends. The founding family has done right by shareholders, and investors can probably expect that to continue.