Universal Display (NASDAQ:OLED) released second-quarter 2019 results on Thursday after the markets closed, absolutely crushing expectations, partly thanks to orders from Chinese customers pulled forward from the second half.

Still, the OLED technologist followed by raising its full-year guidance, crediting the broader momentum of the OLED industry. After briefly surging to an all-time high this morning, Universal Display stock pulled back to trade down around 3% this afternoon. 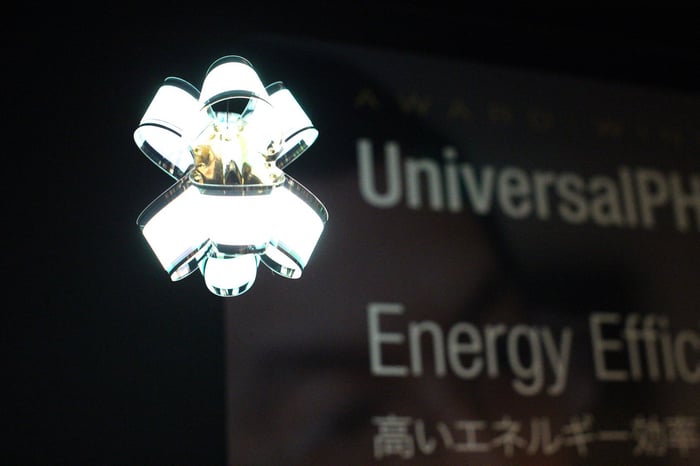 CFO Sidney Rosenblatt said the quarter was "strong ... across the board," noting the company is raising its 2019 guidance as it continues "to see robust OLED momentum" this year.

As a key player in the OLED ecosystem, we are continuing to develop new OLED technologies and next-generation red, green, yellow and blue phosphorescent emissive materials to stay ahead of the curve, and to leverage our first-mover leadership position. At SID Display Week in May, for the first-time, we showcased printed panels from our OVJP (organic vapor jet printing) pilot system. You were able to view up-close our green PHOLED printed test coupon, with lifetimes of over 50,000 hours (LT95) at 1,000 nits. For such early data, we believe that this is extraordinarily encouraging. Also in May, we launched our corporate venture capital arm, UDC Ventures. We believe that these and our other strategic initiatives will strengthen and support our primary focus of enabling our customers' success, and therefore, our success.

With the usual caveat that the OLED industry is at a "very early state where many variables can have a material impact on its growth," Universal Display now expects 2019 revenue in the range of $370 million to $390 million, up $25 million from both ends of its previous target range. Under ASC 605 standards, this new guidance would have been closer to a range of $425 million to $435 million.

All things considered -- and even after stripping out the noise created by those early China orders -- there was nothing not to love about this quarterly beat and raise. And though today's modest pullback, after hitting a fresh all-time high early this morning, may not indicate as much, I think patient, long-term investors should be ecstatic for where it stands today.