The distributor saw slowing end-market conditions constrain its growth in the second quarter.

WESCO International (WCC -4.11%) became the latest industrial company to lower its full-year sales and earnings guidance amid talk of slowing spending and uncertainty among customers. In addition, gross margin was negatively impacted by the shift in sales from its higher-margin industrial business toward lower-margin utility sales.

It was a difficult quarter for the company. Let's take a closer look at the second quarter, and at how WESCO is positioned for the second half.

As you can see, sales were lighter than expected -- doubly disappointing considering the first quarter was also weak -- and operating margin came in toward the low end of the guidance. Discussing the shortfall in the earnings, CFO David Schulz put it down to "pockets of weakness that we are seeing in the U.S. with some industrial and OEM customers, as well as with industrial-oriented contractors."

In addition, Schulz said that "businesses with short cycle exposure and high gross margins declined versus the prior year." So margin was pressured in the quarter; management was forced to lower full-year guidance, and gave disappointing third-quarter guidance as well.

Why the third-quarter guidance looks good

If you're wondering just how WESCO can credibly guide toward 3%-5% sales growth in the third quarter when it struggled to reach 2.2% in the second quarter, a quick look at the chart below will help. As you can see, WESCO's comparisons against the first two quarters of 2018 were much harder than what it's coming up against in the third and fourth quarters.

In other words, WESCO's positive-looking third-quarter guidance is partly a consequence of the unusual cadence of growth in 2018. 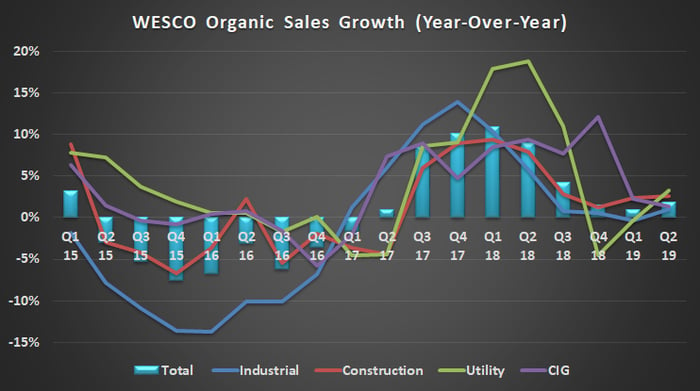 Digging into the details: Gross margin was flat, negatively impacted by the sales mix in the quarter. For example, the industrial end market (36% of sales) saw momentum improving compared to levels in the first quarter, "but was not as strong as we expected," according to Schulz on the earnings call. He cited technology and original equipment manufacturers as areas of weakness.

The organic sales increase of 2.6% in the construction end market (33% of sales) was also somewhat disappointing, as the market was expected to bounce back after poor weather affected construction activity in the first quarter. Schulz said that "[p]roject activity levels remain robust," but added that "we are seeing some project delays with industrial contractors due to budget constraints and uncertainty." 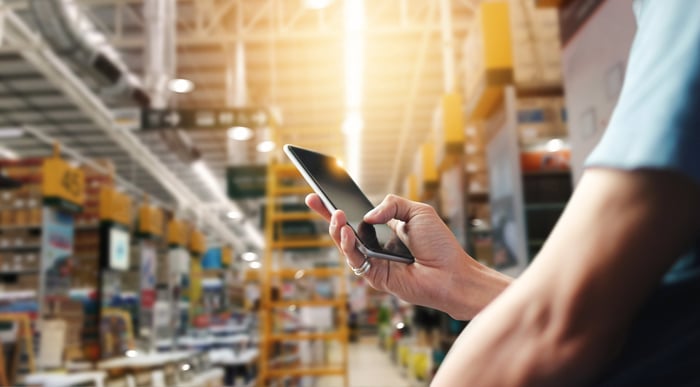 As shown in the chart above, the utility unit (16% of sales) and commercial, institutional, and governmental (CIG) unit (15% of sales) came up against extremely difficult comparisons with the same period in 2018. Nevertheless, they both put in credible performances in the quarter, and Schulz expects "the balance of 2019 to remain strong" for WESCO utility end markets.

Of course, the problem in terms of margin and sales is that WESCO's smaller and lower-margin end markets (utility and CIG) are doing relatively better than its industrial and construction end markets.

Along with the rest of the industrial sector, WESCO investors will be hoping that the overlying strength in the economy helps improve sentiment in the industrial and construction sectors, leading to an increase in spending. If so, the current weak patch will be remembered as a mere blip, rather than as a precursor to an extended period of slow growth.