Many investors went into General Motors' (NYSE:GM) second quarter with a fair amount of uncertainty about how the company would perform. Not only were the automaker's global sales down 6.1% compared to the prior year, but its profit engine, GM North America, was also a large part of that decline, with its sales down 4%.

On the flip side of those sales woes, GM posted record average transaction prices (ATPs), which I argued would power the company's second quarter above estimates -- and they did.

Let's cover some of the highlights from GM's latest quarter, and uncover exactly how much the improved pricing helped carry the automaker's results.

GM's top line managed to meet estimates despite slowing sales, and its bottom line checked in stronger than expected. But planned heavy-duty truck downtime and lower China equity income still weighed on results: EBIT-adjusted margin declined 30 basis points during the second quarter, from 8.7% down to 8.4%. Despite headwinds, shrinking passenger-car sales -- in favor of more profitable truck and crossover sales -- helped improve GM's sales mix and pricing enough to offset most of the headwinds.

What saved the day?

It's easy to say that a sales mix favoring more expensive SUVs, crossovers, and trucks will improve results. But let's look at exactly how much of an effect it had.

GM's EBIT-adjusted result declined from the prior year's $3.2 billion to $3.0 billion during the second quarter. Declining sales lowered the second-quarter result by $0.4 billion.

However, that negative impact from lower sales was more than offset by GM's improved pricing alone, which boosted results by $0.6 billion. Of that $0.6 billion, $0.4 billion was driven by what GM refers to as "majors": vehicles that have launched within the last 12 months and that incorporate significant exterior and/or interior changes compared to the previous generation. Essentially, GM's newer vehicles drove strong enough pricing gains to offset its overall sales decline.

GM's sales mix favored larger vehicles rather than passenger cars; during the second quarter, the mix improved EBIT-adjusted results by $0.3 billion. While GM's slowing sales grabbed most of the headlines, lower sales only hindered its EBIT-adjusted result by $0.4 billion, while its improved pricing and sales mix boosted second-quarter adjusted EBIT by a combined $0.9 billion. 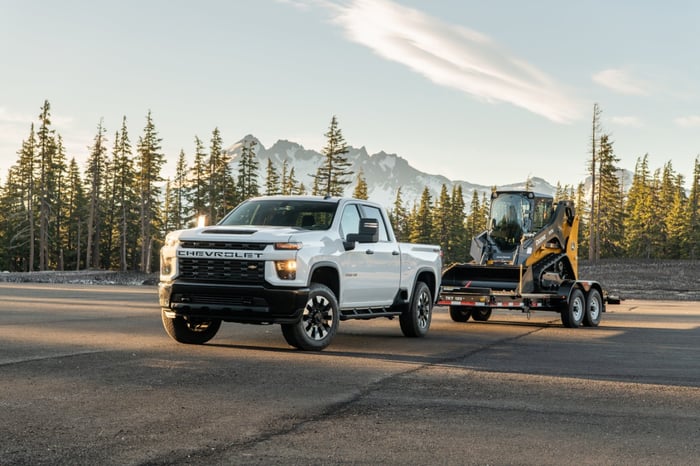 Those previous figures provide great detail on the benefits from GM's improving price and mix overall, but let's dig into more specific figures.

During the second quarter, GM's incentive spend compared to the prior year actually declined roughly $100 per unit. The rule of thumb is that newer vehicles need fewer deals and incentives to sell, which is good news for profit. Another example is GM's light-duty trucks, which posted a larger $1,286 decline in incentive spending. Not only is GM spending less on incentives, but its second-quarter ATPs reached a record $37,126 -- well above the industry average of $33,681.

Zeroing in on the company's profit engine, GM North America -- where most of its highly profitable trucks are sold -- we find another figure to help drive home just how much mix and pricing aided GM's results. Recall that GM's overall EBIT-adjusted margin declined from 8.7% to 8.4%. But thanks to truck sales, GM North America's result was nothing short of staggering: GMNA's EBIT-adjusted margin jumped from the prior year's 9.4% result up to 10.7%. That shows how much more profitable larger, and especially newer, trucks can be.

The good news for investors is that GM's financial performance should remain strong throughout 2019. Sales of the all-new Silverado and Sierra light-duty crew cab models were up by double digits for the second straight quarter compared to the prior year; its overall light-duty pickups gained roughly 300 basis points of retail share during the second quarter compared to the first.

GM's CFO, Dhivya Suryadevara, said in a press release: "We had a solid second quarter, and expect the second half of the year to be stronger than the first half. Our confidence in our full-year outlook is based on our strong full-size truck rollout, other key launches and ongoing cost savings."

If there's a primary takeaway from all of the pricing, incentive, and sales mix data, it's that when you hear management talk about a slew of new vehicle launches, it's far more important than many investors realize. New vehicles sell with fewer profit-eroding incentives and sell for a higher average price. And when the mix favors more profitable crossovers, SUVs, and trucks, the results can easily offset a sales decline.

Wall Street has mostly left automakers for dead, because it's tougher to make a growth argument as sales slow. But savvy investors realize that GM's focusing on more profitable vehicles, and keeping its portfolio fresher than its competitors', can still power top- and bottom-line results above analysts' estimates.