The Internet of Things (IoT) is a rapidly growing market that's on track to be worth $745 billion this year, and is projected to surpass $1 trillion in 2022, according to the analysts at IDC. An ever-increasing array of devices, services, and industrial equipment -- think jet engines, manufacturing equipment, farming equipment, and more -- is being connected to the Internet, allowing companies to acquire and track data they never had access to before, and automate previously manual systems.

But the IoT is more than just an industrial sector story -- it has planted itself firmly within the consumer space as well, thanks in part to Amazon.com (NASDAQ:AMZN). The company's Alexa digital assistant is being integrated into more and more devices, allowing them to be controlled via voice commands. At the same time, Amazon is getting its smart devices into more homes, and integrating more IoT support into Amazon Web Services (AWS). All of that is combining to give the company a dominant position in IoT.

To get a better perspective on Amazon's IoT influence, let's consider what the company is doing with smart speakers, smart home connections, and AWS. 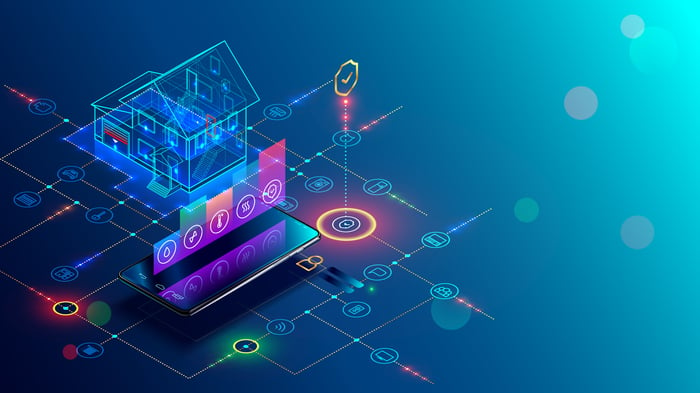 Amazon's Echo devices are most popular smart speakers on the market, with a 61% share. For reference, the second-place Google Home line, which has been gaining a bit of ground, only has a 24% share of the market. But Amazon is interested in much more than device sales here.

The company doesn't make much profit from selling its Echoes -- and often uses them as loss leaders -- but rather looks to the devices as long-term drivers of business for its e-commerce platform. On average, people with Echo smart speakers in their homes spent about $1,700 on Amazon.com in 2017, $700 more per year than the average Amazon shopper, and $400 more than the average Prime member, according to Consumer Intelligence Research Partners.

The key factor is how easy it is for consumers to ask Amazon's voice-controlled digital assistant, Alexa, to order new products or reorder items that they've purchased in the past.

With Amazon's early lead in the smart speaker space, plus the benefits it accrues from Echo owners spending more on its e-commerce platform, it is perfectly poised to grow along with the expanding smart speaker market.

Amazon has worked hard in the past few years to expand its presence in our homes beyond smart speakers. For example, the company in April introduced a service called Key for Garage -- a smart garage-door opener that allows delivery drivers to leave packages securely inside customers' garages. It's the most recent extension of the company's Key services, which allow monitored delivery people to leave packages inside customers' homes or the trunks of their cars.

And then there's the TurnKey service it announced in July: Amazon (in partnership with Realogy) will help would-be home buyers connect with top real estate agents. Then, once a TurnKey customer buys a house, Amazon will send them some of its smart home devices, like an Echo speaker and Ring doorbell, as well as a credit toward home services.

The goal here, too, is for Amazon to get more of its devices inside our homes, smoothing the path toward additional e-commerce sales and making it easier for it to offer us new services in the future.

While Amazon is best-known for its e-commerce dominance, the majority of its profits actually come from its cloud computing business. AWS holds about a 32% share of the public cloud computing market, and the company is using its strength in this space to expand its IoT reach even further.

One recent example of this came in the form of Volkswagen's (OTC: VWAGY) decision that AWS will serve as the backbone of its  cloud-based manufacturing infrastructure. The automaker announced in March that AWS would be used to connect 122 of its manufacturing plants to the cloud, including IoT services, to "increase plant efficiency and uptime, improve production flexibility, and increase vehicle quality."

Deals like this are important for Amazon because cloud computing services will be worth $210 billion this year, and are forecast to reach $370 billion by 2022, according to market intelligence company IDC. The deal with Volkwagen came just a month after AWS was chosen by Sprint to increase its IoT services, data analytics, and data storage for its enterprise customers.

Think beyond e-commerce for Amazon

The value of the Internet of Things may be hard for some investors to imagine because it's often interwoven with existing products and services. But that doesn't mean that Amazon's IoT potential should be overlooked. The company is already using its Alexa assistant to sell more goods, and benefiting as companies look to streamline their manufacturing processes and add more IoT services using AWS. All of which means that as more consumers and companies begin looking to the IoT to make their lives easier, Amazon will likely already be in place, offering the products and services that meet their needs.