Please ensure Javascript is enabled for purposes of website accessibility
Log In Help Join The Motley Fool
Free Article Join Over 1 Million Premium Members And Get More In-Depth Stock Guidance and Research
By Danny Vena - May 25, 2019 at 6:08PM

Is the e-commerce giant setting yet another new standard for online shopping and delivery?

Several years ago, Amazon.com (AMZN -7.16%) made headlines when it introduced Amazon Key, a service available to Prime members that allowed limited access for delivery personnel to drop packages inside customers' homes. Despite some initial fears, the service has become remarkably successful for the e-commerce company, prompting an expansion of the program.

Late last year, Amazon announced it was partnering with several automakers in a bid to deliver packages to the trunk of your car. In April, it added garages to the list. Now the service, which has been rebranded Key by Amazon, is expanding even further, making the service available to apartment buildings and businesses. 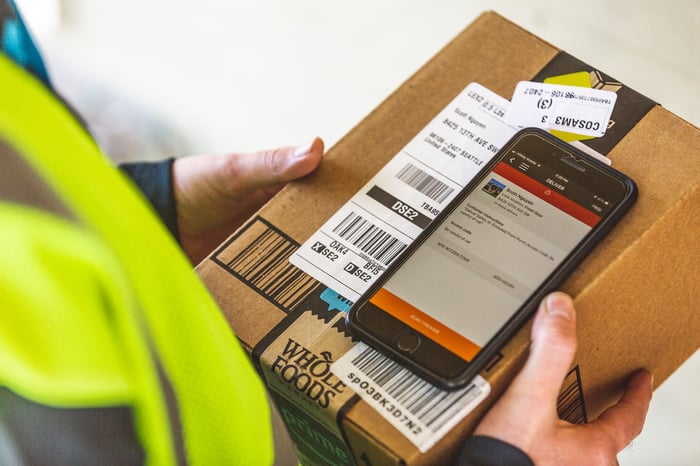 Key for Business is a smart fob for drivers who deliver Amazon packages to commercial and residential properties. It allows building owners and property managers to give controlled access to delivery drivers by linking them with building entry systems via custom entry codes. This allows them to make deliveries without hassling residents or managers. Key for Business integrates with the building access systems used by a number of large property owners, including WinnCompanies, Avalon, Kettler, and others.

This joins the Key for Garage service, which allows consumers to both monitor and control their garage doors using the Key app, so Prime members can direct deliveries to their garages -- as long as they own a compatible garage-door opener.

While Amazon initially partnered with General Motors and Volvo to provide access to the trunks of participating vehicles, that list grew in April with the addition of 2017 model year and newer Ford and Lincoln vehicles.

Amazon is also expanding Key in other ways. The service now integrates with the Schlage Encode, the first smart Wi-Fi equipped deadbolt that works with Amazon's system. Key also integrates with Amazon's Ring Video Doorbell, which allows users to see who's at the door via a real-time live feed, communicate with them, and grant them access to the home, if desired.

Key by Amazon: how it works

If you aren't familiar with Key by Amazon, it might sound a little creepy, but there are some built-in safeguards. The revolutionary service uses a combination of a web-enabled camera and smart lock. When a delivery arrives at the door, the driver scans the barcode on the package, which communicates with Amazon's cloud to request access. The camera will begin recording in order to capture the delivery. The door is digitally unlocked, and the driver can place the package inside. The driver then signals for the door to be relocked (he can't make his next delivery otherwise). A camera captures the entire procedure and streams the footage to the user. The homeowner can also grant access to the home using the mobile app.

There are, of course, other benefits to the service, such as being able to remotely unlock the door for family and friends or letting in the dog-walker or a maintenance worker while away from home. 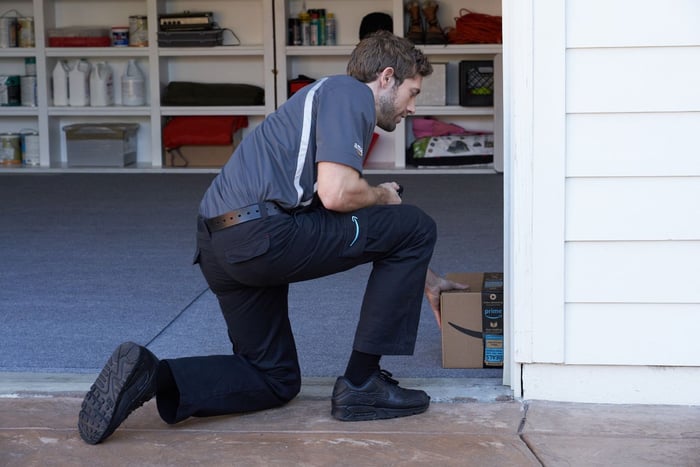 Each of these innovations serves but one purpose: to allow Amazon to sell customers more stuff. Some people might think twice about letting a delivery driver in their front door, but they wouldn't give it a second thought if it's the trunk of their car or their garage. And by targeting businesses and apartment complexes, the company is removing a pain point for property managers and customers alike.

Amazon's two-day delivery became the industry standard, forcing competitors to step up their game. Now, the company is offering one-day shipping as well as a host of secure locations to keep those packages safe -- raising the bar yet again for what customers will expect when it comes to delivery options.