Shares of NovoCure (NVCR 4.73%), which makes a device for treating cancerous solid tumors with electric fields, rocketed 31.6% higher in July, according to data from S&P Global Market Intelligence.

We can attribute NovoCure stock's strong July performance in part to a continuation of the upward momentum it's enjoyed for some time thanks to a spate of good news.

In May, the company announced that it had received approval from the Food and Drug Administration to use its Optune device to treat malignant pleural mesothelioma. "This is an aggressive and rare form of cancer primarily caused by inhaling asbestos fibers into the lungs," as I previously wrote. Optune was already being marketed in the United States and select international markets to treat glioblastoma (GBM), the most common primary brain cancer in adults.

And in June, as I previously wrote:

The company announced that the German Institute for Quality and Efficiency in Healthcare "has published its rapid report concluding that, based on a review of Novocure's EF-14 phase 3 pivotal trial, patients with newly diagnosed glioblastoma (GBM) lived longer when treated with Optune in addition to standard chemotherapy, without affecting quality of life." This finding brings the company a step closer to securing national reimbursement for Optune in Germany.

That said, there was also one big July catalyst behind last month's pop: NovoCure's July 25 release of its second-quarter results. Shares surged nearly 9% higher that day and gained just over 17% from that day through the end of the month. In Q2, the company's revenue rose 41% year over year to $86.7 million and its net loss narrowed 92% to $1.3 million, which translated to loss of $0.01 per share. Wall Street was expecting a loss of $0.07 per share on revenue of $80.2 million, so NovoCure easily beat both estimates. Notably, the company achieved its first ever quarter of positive operating income. 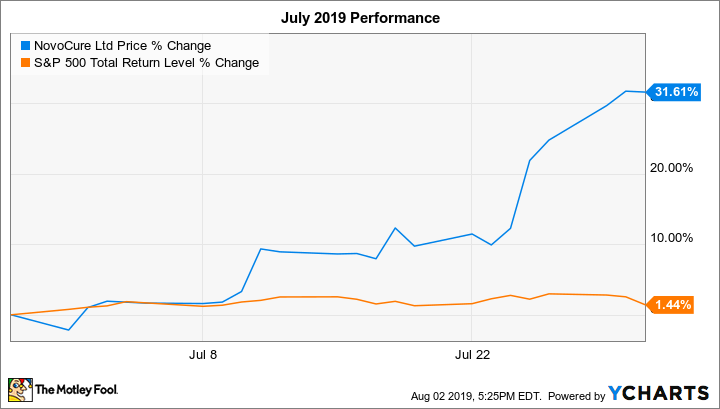 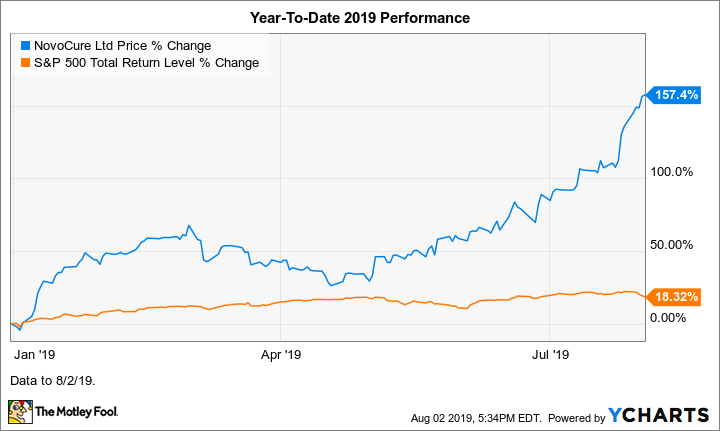 Things are going well for NovoCure on the regulatory approval, financial, and insurance coverage fronts. In addition, it has "enrollment ongoing in four phase 3 pivotal trials," according to its earnings release.

Moreover, NovoCure could launch Optune in China this year. As Doyle said on the Q2 earnings call, "Our partner, Zai Lab, has submitted an application to the Chinese regulatory authorities to designate Optune as an innovative medical device and is pursuing a clinical trial waiver for the GBM indication in China. Should a clinical trial waiver be granted, Zai Lab intends to launch Optune in China before year-end."

This is a stock at least worth putting on your watch list if you're an investor who is comfortable investing in a not-yet-profitable healthcare player whose growth is dependent upon obtaining regulatory approvals.