President Trump's 2024 timeline for a moon mission may make Northrop Grumman the only choice.

NASA's Artemis Project is a multibillion-dollar bet that we can return to the moon in just five years' time.

To get us there, the National Aeronautics and Space Administration plans to build a "Lunar Gateway" space station where spaceships will dock, and from which lunar shuttles will descend and ascend, carrying astronauts to and from the lunar surface.

There's just one problem with this plan: Originally envisioned as a near-decade-long marathon in which NASA would methodically make its way back to the moon by 2028, the moon race has morphed into a sprint. Earlier this year, Vice President Pence publicly declared America's intention to return to the moon by 2024, compressing the timeline, scrambling the space agency's plans -- and, perhaps, opening up its checkbook. 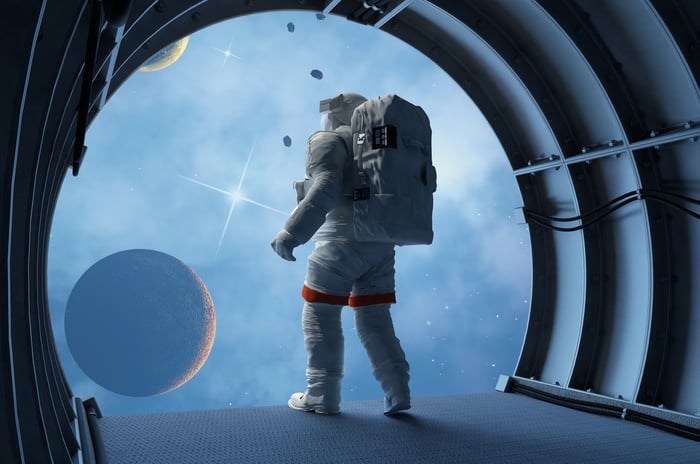 Who wants to bid on building a space station? Sold!

Case in point: Last week, NASA published a "Justification for Other than Full and Open Competition for the Minimal Habitation Module", which will form the living quarters for the new Lunar Gateway space station. In its statement NASA explained that, after first selecting six U.S. space companies to compete for the right to build space habitats for its astronauts, it has now decided to cut its competition short and "sole source the procurement of the MHM flight unit for the cislunar Gateway to Northrop Grumman Innovation Systems (NGIS)."

Yes, you read that right: Rather than carefully evaluate proposals and pick the best offering from among Boeing, Lockheed Martin, Bigelow Aerospace, and other contenders, NASA is instead handing the Lunar Gateway habitat (or "hab") module contract to Northrop Grumman (NOC 0.16%) -- no competition required.

NASA explained that it really has no choice in this matter, because to arrive in orbit by the Trump Administration's 2024 deadline the Lunar Gateway hab module "must be launched [by] late 2023."

If the 2028 deadline had remained intact, there would have been time to evaluate all competing bids to see who could build the best product for the best price -- NASA says a full and open competition could take as long as six and a half years to complete. But "due to the time and expense required to design and fabricate a human-rated deep space module, it is necessary for NASA to begin development activity as quickly as possible" -- leaving no time to hold a competition. As of today, "NGIS [is] the only NextSTEP-2 contractor with a module design and the production and tooling resources capable of meeting the 2024 deadline."

The result: Northrop Grumman is going to win this contract by default.

Granted, no actual contract has been awarded yet, but this seems the only logical outcome at this point. All Northrop really needs to do is submit its bid, offer NASA a "fair and reasonable ... overall price," and voila, its contract will be granted.

So how much does Northrop Grumman stand to win here?

Northrop's hab module will be based on its proven "Cygnus Cargo resupply module," a spaceship that has already flown nearly a dozen resupply missions to the International Space Station.

Over the course of these missions NASA has paid Northrop Grumman an average of about $339 million per Cygnus mission. Granted, there are big differences between the cost of building and launching a Cygnus capsule a few dozen miles to the ISS atop a Northrop Grumman rocket, and modifying a Cygnus capsule to serve another purpose entirely, then launching it on someone else's rocket all the way to the moon. Even so, $339 million should serve as at least a ballpark estimate for the likely price NASA will have to pay Northrop for its new hab module.

However, $339 million (or thereabouts) is barely 1% of the nearly $33 billion in annual business Northrop Grumman does every year, according to S&P Global Market Intelligence data. In terms of dollars and cents, this contract isn't going to move the needle much for Northrop Grumman stock.

On the other hand, there are also the intangible benefits to consider. Winning the Lunar Gateway hab contract will put Northrop Grumman's name front and center on Project Artemis. Beginning in 2024, and perhaps for decades to come thereafter, astronauts visiting the moon will be living in quarters designed, built, and maintained by Northrop Grumman.

The cost of that module may only be $339 million -- but the publicity will be priceless.