After sales more or less flatlined in the last year and the stock cratered in price over the same span of time, Electronic Arts (NASDAQ:EA) looks like it is back on a positive trajectory. Its slate of video games still isn't a perfect match for a shifting industry, but the gaming juggernaut -- hated as it might be by some -- has breadth and depth and no shortage of popular titles to choose from. With the first quarter of its new 2020 fiscal year (the three months ended June 30, 2019) now in the books, things are once again looking up for the company.

A few blunders and missteps

The video game industry is evolving, and Electronic Arts' transition to address that evolution has been good but not always spot on. The continuous elimination of packaged games in lieu of downloads has gone off easily enough, but monetizing games over long periods of time rather than making them episodic events with monetization up front has been less successful.

Besides a few game releases in the last year underperforming management's expectations (e.g., Battlefield V, Command & Conquer: Rivals, and Anthem), as well as controversy on a global scale surrounding microtransactions (additional content for an in-game fee), EA and its peers have had to come to terms with the (no pun intended) game-changing success of rival Epic Games' Fortnite. The free-to-play multiplayer shootout has attracted hundreds of millions of followers worldwide since its release through a potent combination of wacky gameplay and customizable content.

During the first-quarter earnings call, EA provided some details surrounding its surprisingly successful answer to Fortnite: its newly released Apex Legends. The game got off to a hot start in early 2019 with 50 million monthly players, but even with the much-anticipated "Season 2" content update in July, management said the game is averaging 8 to 10 million players a week.

It isn't the global blockbuster success of Fortnite, but tens of millions of engagements every month is no slouch. It's plenty of reason to keep new content flowing into Apex Legends, and EA plans to do just that. At the end of the day, it's all about results anyway -- and the 6% and 32% year-over-year rise in revenues and operating cash flow, respectively, during Q1 was more than enough to keep investors pleased. 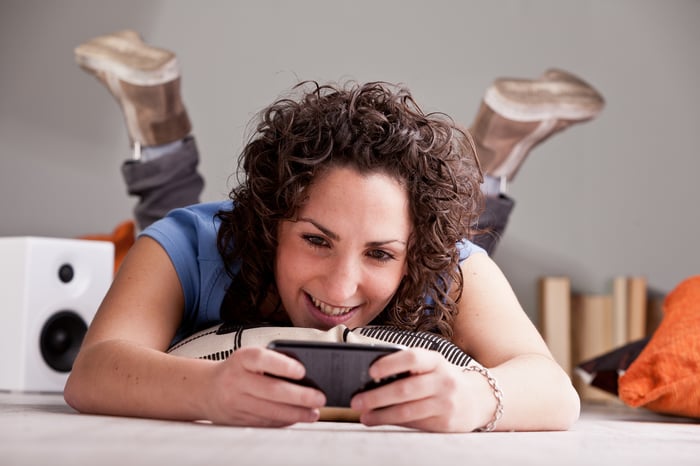 Apex Legends and the battle for free-to-play gaming aside, EA has no shortage of intellectual property it can tap into. Its sports titles, including Madden NFL and FIFA, are surefire performers that tap into the popularity of American football and football everywhere else in the world, respectively. The Sims 4 life simulator -- even years after release -- also continues to attract new players around the globe. On the mobile side, a new Plants vs. Zombies title is also in beta testing. And we shouldn't forget the new sci-fi epoch in Star Wars Jedi: Fallen Order coming out this fall, as anything with Star Wars attached to it always has the potential to become a blockbuster.

EA feels confident in its pipeline and so continues to repurchase shares -- to the tune of $305 million worth during the last quarter alone. With $979 million left on the program, that continues to be a lever management can pull to keep earnings rising faster than sales. Not that the top line isn't worth mentioning. For full fiscal year 2020, total revenue is expected to be up 8.6% to $5.375 billion, erasing the decline of last fiscal year and helping EA achieve a new sales record -- if it all pans out as planned.

In short, Electronic Arts is back in growth mode even as the company adjusts to changing times in the world of video games. It's likely to be a bumpy ride, but the stock looks like a good bet on the industry as gaming continues to advance in popularity around the globe.