FedEx (NYSE:FDX) has finally admitted what everyone could see was obvious: Amazon.com (NASDAQ:AMZN) is a logistics industry competitor. The global freight carrier's annual 10-K report for the first time said that the capabilities that Amazon has developed over the years -- including delivery vehicles, aircraft, and airport hubs for which it is "investing significant capital" -- now allows it to be considered a competitor.

It was undoubtedly becoming difficult to ignore the elephant in the room when even the elephant was trumpeting it was a competitor. Amazon said in its own annual filing that it viewed "companies that provide fulfillment and logistics services" to be competitors, so it was time to end the charade that the online retailer was simply a benign entity. 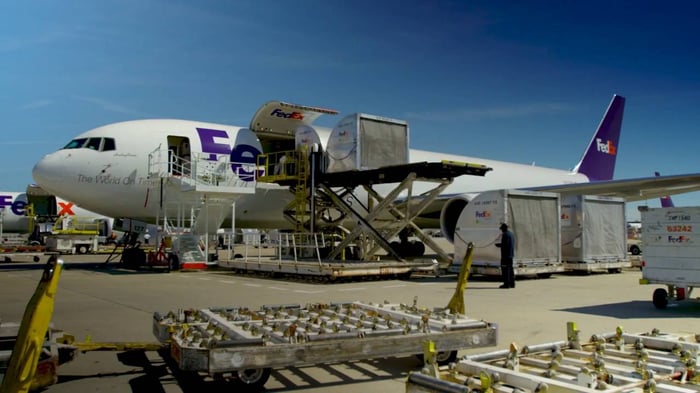 Air cargo is only one area where FedEx will feel competitive pressure from Amazon. Image source: FedEx.

It's clear FedEx's attitude toward Amazon was changing when it refused to renew its Express domestic contract with Amazon for package delivery. FedEx portrayed the decision as based on a desire to service the broader e-commerce opportunity, noting package delivery would double to 100 million packages per day by 2026. But the carrier seemed to have little to gain by helping Amazon, which was rushing to build up its own air cargo service.

Despite protests even as late as this past March -- when COO Rajesh Subramaniam said Amazon "is not a threat to our business ... nor is Amazon a threat to our future growth," when Amazon yanked $600 million worth of business from XPO Logistics -- it was understood by the industry that it had to take Amazon's threat more seriously.

While Subramaniam was right that the loss of any Amazon business would be negligible to its operations, all of the other business Amazon could potentially steal away could be significant if its rise was left unchecked.

Although FedEx still handles Amazon's ground and international deliveries, there is hardly any rationale left for it to actually continue assisting Amazon's ambitions. It would not be surprising if those other ties are also eventually severed.

A long way to go to catch up

For all of the potential harm Amazon poses, it is not a threat yet.

While Amazon has significantly built out its capabilities, it still trails far behind the leaders. Its vehicles currently number in the tens of thousands, though it does deploy third-party drivers and has committed $1 million to helping employees start up their own independent delivery business under the Prime banner.

Yet Amazon only has around 50 aircraft now (with as many as 70 by 2021), and it is only now building out an air hub at Cincinnati/Northern Kentucky International Airport that won't open until 2021. At full capacity, it will be able to handle 100 planes. Amazon is also opening an expanded regional air hub at Fort Worth Alliance Airport next year and will open this year a new sorting facility in Ohio's Wilmington Air Park.

Of course, Amazon is only just starting out, but it has signaled it intends to challenge the hegemony of FedEx and UPS by discounting prices -- in order to lure customers away, it is reportedly willing to give up fees its rivals charge. If a bidding war starts, that could hurt the larger carriers' performance, since FedEx has credited fuel surcharges with having a "positive impact on revenues at all of our transportation segments in 2019."

Amazon indicated long ago it was coming after the big carriers. It's about time FedEx admitted what everyone else knew long ago. Now it can start reshaping its business and defending it, since it has at last identified the threat for what it is.