Please ensure Javascript is enabled for purposes of website accessibility
Log In Help Join The Motley Fool
Free Article Join Over 1 Million Premium Members And Get More In-Depth Stock Guidance and Research
By Daniel B. Kline – Aug 5, 2019 at 7:45AM

According to a new survey, some fees are understandable, but these really get consumers riled.

Fees can outrage people -- they're often not listed in the price of an item or service, but you have no choice but to pay them. Sure, those concert tickets cost $100 each, but with the various fees tacked on by the seller, you have to spend a fair amount more.

It's hard, if not impossible, to avoid fees. Nearly three-quarters of Americans (74.5%) paid shipping fees for an online order in the past year and 52.8% paid ATM fees, according to a new survey commissioned by Fund Rocket, a company that offers business funding. The company surveyed 1,018 people weighted equally by gender and with an average age of 37.4 years.

Fees bother people largely because they're tacked on after you consider the cost of a purchase. Not all fees, however, are created equal. Some bother people more than others. 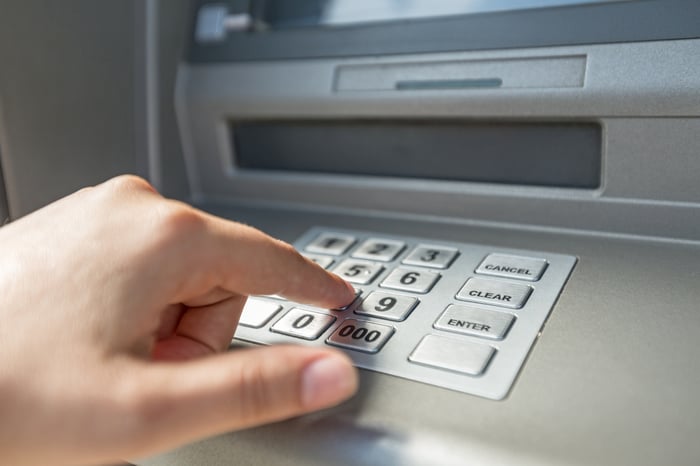 These are the most-hated fees

"Delivery and shipping fees may be annoying, but consumers seem to understand their necessity," according to a Fund Rocket blog post on the survey. "Fees associated with entertainment, like ticket processing and printing fees, were deemed most unfair by Americans, followed by checking account minimum balance fees."

It's easy to see why people would dislike ticket process fees, as they tend to add significant costs to a purchase. Banking fees, including the second-ranked "overdraft fees" and fourth-place ATM fees, also bother consumers. In the case of the former, the charge is particularly odious because it does feel a bit like a bank kicking you when you're already down.

"Americans' hatred of fees associated with banking may be due to the discrepancy between perceived services and corresponding costs," according to the blog post. "While banks are supposed to be where people can save and manage their finances, the extra fees can cost them a tremendous amount of money instead -- an ordinary customer could lose upward of $1 million to banks throughout their lifetime." 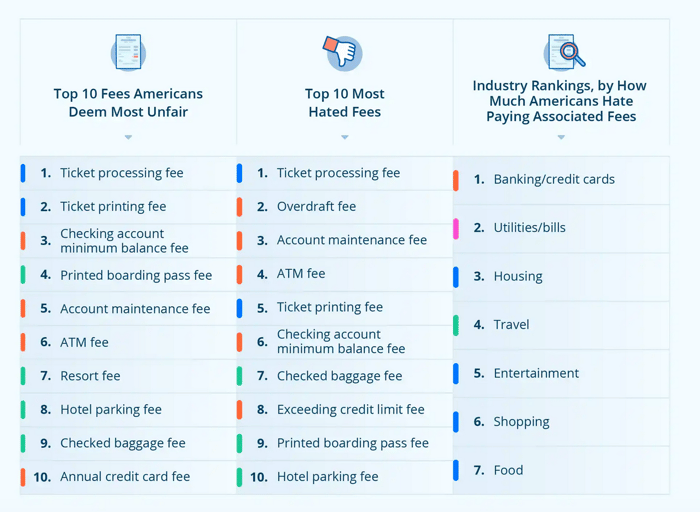 How can you avoid fees?

Not paying fees requires financial discipline and some time spent doing research. Bank fees, for example, can vary a lot by bank, and some banks even waive ATM fees (at least when you use in-network ATMs).

Ticket fees can, in some cases, be lessened by buying them at the venue instead of online. That's not always true, however, so you should do your homework before making a trip. Checked bag fees can be avoided by being choosy about which airline you fly on, and hotel parking fees might be avoided by parking in public lots (which will still cost money, but generally less).

Some fees can't be avoided, but many can be minimized or skipped altogether if you plan ahead. It's possible, for example, to add overdraft protection to many checking accounts. This might involve linking an alternative payment method or paying for a program that covers minor withdrawals.

Fees are sometimes unavoidable, but it makes sense to skip them when possible. Small amounts add up, and spending money to get nothing in return is something to fight against as hard as you can.