These companies bucked the broader market's sell-off thanks to earnings reports and an acquisition.

Major benchmarks tanked on Monday amid escalating trade tensions between the U.S. and China, as China devalued its currency against the dollar. That move, done in retaliation for a new round of tariffs announced by President Trump and set to take effect on Sept. 1, will make American products relatively more expensive and hurt Chinese demand for U.S. exports.

However, a handful of companies were able to post share-price gains, including Tyson Foods (TSN 0.35%), Jacobs Engineering Group (J -0.66%), and Gannett (GCI). 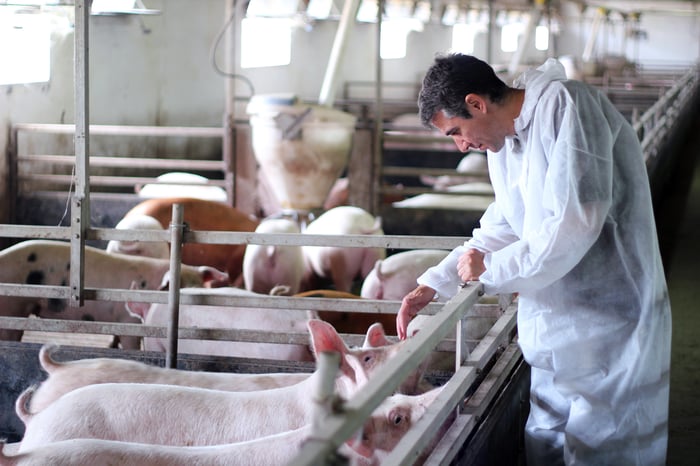 Tyson Foods reported upbeat fiscal third-quarter earnings results this morning, sending shares up 5% and touching record highs in the process. Total revenue increased 8% to $10.9 billion, which translated into adjusted earnings per share of $1.47. Analysts had been modeling for $1.42 per share in adjusted profits. As reported under generally accepted accounting principles (GAAP), earnings per share jumped 25% to $1.84. Tyson expects to benefit from an African swine fever outbreak in China that has hurt local pork production. Once China exhausts frozen inventory, Chinese importers are expected to turn to international suppliers like Tyson. "Given the magnitude of the losses in China's hog and pork supplies, the impending impact on global protein supply and demand fundamentals is likely to be a multi-year event," CEO Noel White said in a statement. Tyson reiterated its 2019 guidance of $5.75 to $6.10 in adjusted earnings per share.

Jacobs Engineering also reported strong fiscal third-quarter earnings, and the stock posted a gain of nearly 2%. Revenue increased 8% to $3.2 billion, with net revenue growing organically by 11% when excluding revenue associated with the recent acquisition of KeyW. That led to adjusted earnings per share from continuing operations of $1.40. Consensus estimates called for $1.25 per share in adjusted profits. Jacobs' backlog increased to $22.5 billion, thanks in part to the KeyW deal. "We are creating a company like no other, putting our knowledge and imagination together to shape the next generation of innovative solutions," CEO Steve Demetriou said in a statement. "Our KeyW acquisition is already delivering with a growing pipeline of new and enhanced opportunities as we bring the two organizations together." Jacobs boosted its fiscal 2019 outlook and now expects adjusted earnings per share of $4.75 to $5.00, up from its prior forecast of $4.45 to $4.85.

Gannett's getting bought out

In line with recent rumors, Gannett announced today that New Media (GCI 1.83%) has agreed to acquire the local newspaper publishing leader in a cash-and-stock deal valuing Gannett shares at $12.06 each, pushing the stock up 3%. Gannett investors will receive 0.5427 shares of New Media in addition to $6.25 per share in cash, collectively owning 49.5% of the combined company. The companies expect to generate $275 million to $300 million in cost synergies per year, and the deal is expected to close by the year's end. Gannett also reported second-quarter results, which showed operating revenue declining to $660.3 million, leading to adjusted earnings per share of $0.21.