Shares of Gannett (NYSE:GCI) have jumped today, up by 19% as of 1 p.m. EDT, after The Wall Street Journal reported that the company is in talks to be acquired by GateHouse Media. That deal would combine the two largest local newspaper companies by circulation in the U.S.

Gannett, which publishes USA Today and the Detroit Free Press, among others, is in talks with GateHouse parent New Media Investment Group (NYSE:GCI) regarding a deal that would consist of both cash and stock. Gannett CEO Robert Dickey retired in May of this year, and the company has not yet named a permanent successor. Rumors immediately surfaced that Gannett was in merger talks with numerous media companies, including GateHouse, McClatchy, and Tribune. 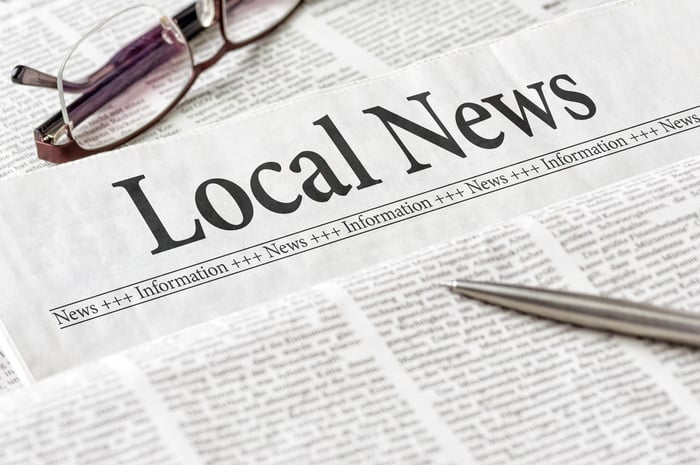 New Media CEO Mike Reed would lead the combined company, according to the report. GateHouse offers a slew of local papers, operating in 615 markets in 39 states. It's unclear how much New Media might pay for Gannett. New Media is backed by Fortress Investment Group, a prominent private equity firm that manages nearly $40 billion in assets.

Local newspapers continue to suffer from long-term declines in both subscription and ad revenue, as consumers have shifted toward national outlets while ad dollars flow to online platforms. Investment funds have been snapping up local media outlets and cutting costs to squeeze out returns. For example, Alden Global Capital, which owns local outlets like the Denver Post and the Boston Herald, has been using a similar strategy and had also considered acquiring Gannett earlier this year.

Likewise, GateHouse is known for cutting costs in order to boost profitability, as many companies see consolidation as a way to survive, leveraging economies of scale and cost synergies. A deal could be announced within a matter of weeks, according to the Journal.