Gannett is a risky stock when you look at profitability and the debt it has piled up, but at less than $1 per share, there is significant upside.

I'll preface this article by saying that Gannett (GCI), now the largest publisher of newspapers in America, is a risky play. The newspaper business is a brutal industry with ad revenue and subscriptions falling significantly in recent years, and many newspapers dropping like flies. The U.S. has lost almost 1,800 papers since 2004, including more than 60 dailies and 1,700 weeklies, according to the Hussman School of Journalism and Media at the University of North Carolina.

Investors' displeasure with the deal, combined with the fallout from the coronavirus pandemic, has sent the company's stock tumbling to just $0.82 per share as of this writing. To make matters worse, Gannett recently announced it will be eliminating its upcoming quarterly dividend and looking to reduce expenses by an additional $100 million to $125 million through job cuts, furloughs, and pay reductions for senior management. Obviously, things are not going well, but the stock has a year-to-date high point of $7 per share and was trading at almost $19 in mid-2018. If the company can survive, there's significant upside. 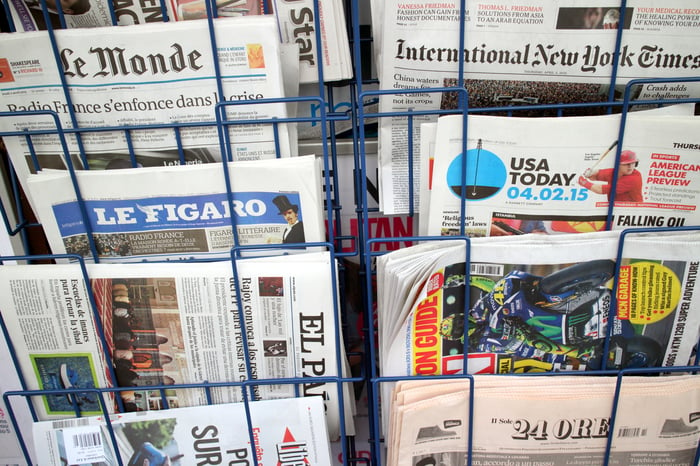 Gannett is not profitable. At the end of 2019, the combined company had an operating loss of roughly $147 million, according to its annual report. Most of that is from the merger, but even before that, New Media's annual income was a far cry from what it used to be. At the end of 2015, the company had more than $103 million in operating profit. In subsequent years, the highest profitability New Media reached was roughly $61 million in 2016. Gannett has followed a similar trend.

Another issue is debt. To purchase Gannett, New Media took out a five-year term loan of $1.8 billion with 11.5% interest. Debt obligations at the company at the end of 2019 were roughly $2.8 billion, while total assets of the company are $4.0 billion. Not an ideal situation, and that's likely the reason why the company had to take such drastic measures with its dividend and expense reduction.

The management team is hard to trust, too. Let's not forget, when he was CEO of Gatehouse Media in 2012, Reed took an $800,000 bonus at the same time the company was making major layoffs at its 300 newspapers across the country. Investors have also expressed skepticism over recent revenue projections Reed made post-merger. Following the Gannett-New Media deal, Reed said the company projected revenue to decline at a rate of 3% or 4% percent annually for about three years after the merger. But Gannett's revenue has been declining at around 9% in recent quarters, while New Media's revenue was declining at about 7%.

As risky as the stock may be, billionaire investor Leon Cooperman's hedge fund Omega Advisors now owns almost 7% of outstanding shares. While he has acknowledged in the past that he does not buy into management's projections, he also said the company's attractive dividend makes any risk that does exist easier to stomach.

While the dividend for this quarter is now out of the picture, the company had initially planned to pay a quarterly dividend of $0.19 per share. Before the recent announcement, Gannett had been trading around $3 per share for much of the month, which would have resulted in a dividend yield of approximately 25%.

Despite issues with management over the years, Reed is an experienced media CEO who is no stranger to tough times. In 2012, when he took that bonus amid layoffs, Gatehouse was trading at $0.05 cents per share. Additionally, as part of the $100 million to $125 million of expense reductions, the company said it would make "significant pay reductions for senior management."

Though the market was bearish on the deal, I actually think the move makes sense if the company can pay off its debt and get through this difficult time. Before Gannett, New Media was a company composed of small weekly and daily newspapers that didn't have much brand recognition other than in the local communities they served. New Media was also a company still trying to figure out how to make the transition to digital. At the end of 2018, digital advertising and marketing revenue only made up about 12% of the top line.

With the acquisition of Gannett, which reported 38% digital revenue in its third-quarter 2019 report, that number increased, and Gannett also brings a number of top brands to the company. Before the merger, New Media likely realized how important big news brands were to the survival of the company.

In recent years, New Media has purchased larger regional newspapers including The Providence Journal and The Austin American-Statesman. But Gannett brings even more attractive names like USA Today, which has a daily circulation of almost 1.4 million, and the Detroit Free Press, which has a Sunday circulation of roughly 925,000. Perhaps the new company can use these larger, more respected brands to leverage more subscriptions at its smaller newspapers.

If you really look at the industry, the few successful newspapers in the country are those with huge brand recognition such as The New York Times and The Washington Post. While Gannett may not reach those levels, this company can survive thanks to its important position in the future of news. The company recently disclosed that in the past 45 days, USA Today "has had more than 400 million views of its coronavirus stories, videos, graphics and photo galleries." Plus, the combined company says it can achieve $300 million in annual post-merger cost synergies by the end of 2021 through manufacturing and distribution, back office rationalization, regionalization of sales and content management, and technology systems integration.

Investing in Gannett is undoubtedly a risky move. The company has a ton of debt; revenue has been declining; and the company needs to show it can generate more digital subscriptions. Still, becoming the largest newspaper publisher in the U.S. with reputable news brands gives Gannett a certain amount of positive momentum. It may not be what's best for journalism, but from a business standpoint, adding scale makes sense.

Don't dedicate a large chunk of your portfolio to this stock, but it's definitely worth a small position at these beaten down prices.

Why Gannett Stock Is Rising Today