Please ensure Javascript is enabled for purposes of website accessibility
Log In Help Join The Motley Fool
Free Article Join Over 1 Million Premium Members And Get More In-Depth Stock Guidance and Research
By Lou Whiteman - Updated Apr 22, 2019 at 11:12AM

The long-languishing cybersecurity vendor has finally found a deep-pocketed partner.

Shares of KeyW Holding (KEYW) jumped more than 40% in early trading on Monday after the government contractor agreed to be acquired by Jacobs Engineering Group (J 1.62%) for $815 million in cash and assumed debt. Shares were up over 42% as of 11 a.m. EDT today.

KeyW, named for its founder's affinity for Key West, Florida, is a cybersecurity specialist with deep ties to the National Security Agency (NSA). The company's shares have languished since the June 2015 death of its founder, onetime NSA senior manager Leonard Moodispaw. It trailed the S&P 500 by nearly 60 points from his death to when the merger agreement was announced. 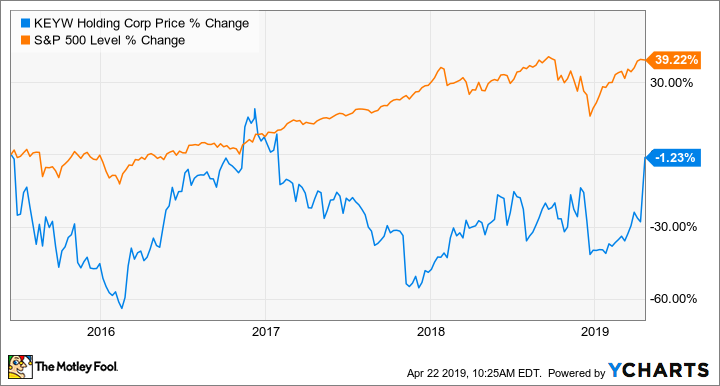 Terms of the deal call for Jacobs to pay $11.25 in cash for each share of KeyW, a premium of 43% over the company's Friday close, and assume more than $200 million in KeyW debt.

Jacobs is best known as an engineering firm, but the company has been moving steadily to increase its cybersecurity credentials. This is the largest of three government-focused cybersecurity companies Jacobs has acquired in the last three years, following purchases of Blue Canopy of Reston, Virginia, and Van Dyke Technology Group of Columbia, Maryland. The deal for KeyW will increase Jacobs' total number of employees with top-secret government clearance by 50%, and allow the company to compete for larger, more sophisticated contracts. While details of much of KeyW's business is classified, the company is involved in both defensive and offensive cybersecurity operations for its government customers, as well as assisting in collection and organization of intelligence.

It is likely this deal will close as planned, cashing out KeyW shareholders and leaving one less cybersecurity specialist available on public markets. But for investors looking for more exposure to the public sector, Jacobs is steadily becoming a more intriguing option. KeyW is a company with unique capabilities but lacked the heft and wherewithal to compete against rapidly expanding rivals, a problem it is hoping to solve via this sale.

Jacobs is already one of the top contractors to NASA, and by buying KeyW, it has served notice it is serious about becoming a major force in intelligence and cybersecurity.

Why Shares of KEYW Holding Corp. Popped 11% in September

Why Shares of KEYW Holding Corp. Popped 29% in May