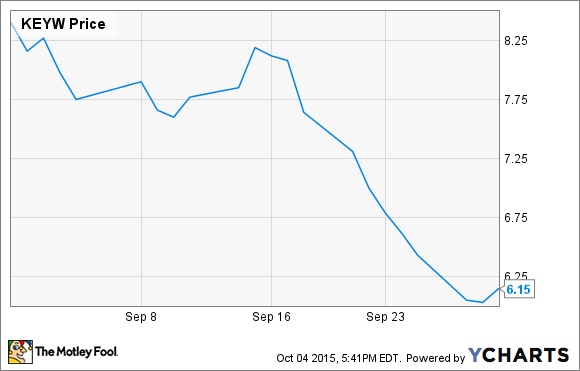 KEYW Holding Corp. (NASDAQ:KEYW), a small-cap provider of cybersecurity solutions to the federal government, as well as security software for law enforcement and U.S. businesses, was absolutely throttled in September, with its stock losing 27% according to data from S&P Capital IQ.

Looking at KEYW's news feed and you might struggle to understand why this cybersecurity hopeful tumbled so badly. However, dig beyond the surface and three downside catalysts will emerge.

To begin with, short interest has been on the rise in recent months. Since hitting a low of 10.66 million shares held by short-sellers (traders who make money when the stock price falls) in January, short interest shot back up to 12.29 million shares as of mid-September. More short interest means more traders have a pessimistic view of the company. Short shares can act like a concrete block pulling KEYW Holding's shares down.

Secondly, spending in cybersecurity has been lackluster in recent months. Although cybersecurity spending has a tendency to pick up in the fall, research firm Deltek in its GovCon Industry Study recently noted that a little more than half (52%) of all cybersecurity firms reported a decline in year-over-year spending. I agree that it's a bit of a head-scratcher with the rash of cybersecurity woes we've heard about since 2013, but it's enough to put a damper in KEYW's stock.

But, the nail in the coffin came on Sept. 28, when Raytheon announced that it'd been awarded about $1 billion worth of contracts from the Department of Homeland Security to be the prime integrator and contractor for the agency's network security deployment division. With KEYW wrangling in contracts in the low tens of millions recently, seeing a billion-dollar deal go to a sector competitor is heart-wrenching for its shareholders.

The $64,000 question that investors should be asking here is whether or not KEYW Holding can look past this recent weakness (and the gigantic short position) and head higher over the long run.

On one hand, there are certainly reasons to believe that KEYW has the tools necessary to turn things around. Based on its second-quarter results, the company has in the neighborhood of $2 billion in contract opportunities between the remainder of 2015 and all of 2016, and its submitted and pending proposals stood at nearly $400 million. This alone works out to more than a full year's worth of revenue. It also has a handful of new cybersecurity products, such as HawkEye G, that could differentiate it from its peers.

Then again, KEYW has one problem that could keep its stock from rebounding: it's still losing money. KEYW's second-quarter including an ugly one-time non-cash charge that resulted in a $0.92 loss, but even that aside, KEYW doesn't look as if it has a shot at moving into the black until 2017 or 2018. In order to differentiate its cybersecurity solutions, KEYW is having to reinvest a lot of its cash flow, resulting in heavy spending and quarterly loss after quarterly loss. It also doesn't help that KEYW has missed Wall Street's EPS projections in 10 of the past 11 quarters.

Although the segment is intriguing, given KEYW's shaky earnings history I'd consider it nothing more than a watchlist stock at present.