Coca-Cola (NYSE:KO) is hands-down one of the most widely recognized global companies, and it remains one of the most sought-after dividend stocks. Not only does Coca-Cola boast its powerful namesake brand, but its impressive portfolio also includes well-known names such as Minute Maid, Powerade, Smartwater, and Vitaminwater, among many others. And it has a dividend that was increased earlier this year for the 57th consecutive year -- quite the track record.

While there aren't many companies that can match the scale and brand power of Coca-Cola, here are three companies that will at least pay you better than it does: Philip Morris International (NYSE:PM), Kellogg (NYSE:K), and Brookfield Infrastructure Partners (NYSE:BIP).

Jeremy Bowman (Philip Morris International): Some say sodas are the new cigarettes, given bureaucrats' increasing penchant for taxing and regulating the sugary stuff. But Coca-Cola investors may want to consider old cigarettes instead, namely Philip Morris, the international tobacco giant and purveyor of Marlboro and the heat-not-burn product IQOS.

Its hard to find a better dividend payer in the consumer sector than Philip Morris, with its 5.5% dividend yield, nearly double that of Coke's 3.1%. Going back to its days when it was part of Altria, the cigarette vendor is a Dividend Aristocrat and one of the best-performing stocks over the end of the 20th century and beginning of the 21st, according to some measurements.

Despite the negative long-term trends against tobacco, now looks like an especially prudent time for investors to consider Philip Morris. Though demand for cigarettes is steadily declining, the product is also an addictive one with few reasonable substitutes, making it a good way for investors to ride out trade tensions with China. Even if China's economy takes a hit, as many fear, Chinese smokers aren't about to cut back on their daily habit.

The company is coming off an impressive second-quarter earnings report. The stock jumped 8.2% after the report came out, since revenue was up 9% to $7.7 billion, adjusting for currency and divestitures.

On the bottom line, adjusted EPS rose 15% to $1.46, and the company said heated tobacco shipments rose 37%, easing previous concerns about a slowdown with its IQOS product. It also gained market share in that growth area, adding 0.5 percentage points to 2.1%.

The latest report shows why Philip Morris remains a nearly unmatched cash machine, and with that 5.5% dividend yield, it's a better option for income-seeking investors than Coca-Cola.

Daniel Miller (Kellogg): One dividend stock that possesses similar advantages as Coca-Cola, but will pay you more, is Kellogg. The manufacturer of cereal, crackers, and other assorted packaged foods has economies of scale that provide investors with a cost advantage. And because retailers see the company as a valuable partner, Kellogg's shelf space is more secure long term than it is for smaller competitors. Better yet, the company trades at a modest consensus forward P/E of 16 times and offers a 3.6% dividend yield -- not too shabby. 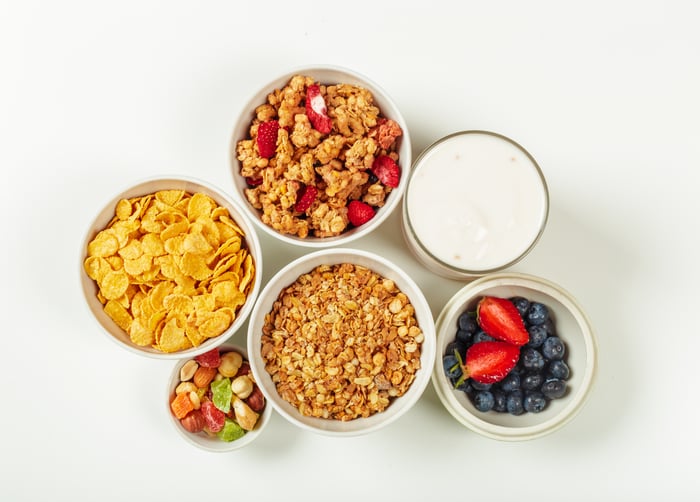 Kellogg faces headwinds similar to those for Coca-Cola. It owns a portfolio of brands often loaded with carbs and fats at a time when consumers are trending toward healthier snack options. Management sees the healthier trend as well, so it acquired RXBar for $600 million and purchased a $420 million stake in Tolaram Group, securing products in healthier segments.

Kellogg took its evolution a step further this spring when it divested a chunk of its snacking business to Ferrero Group for $1.3 billion in cash. All in all, the company divested brands such as Keebler and Famous Amos, and even its fruit snacks and pie crusts, among other products.

Ultimately, the company is updating its portfolio to secure a foothold in natural foods, digestive health, and emerging markets. Management believes these investments and divestitures will help reduce complexity and drive more sustained, profitable growth over the long term.

The company also believes it will cut between $600 million and $700 million in costs from 2017 through 2019, which will help support its investments into brand development and product innovation. While Kellogg needs to reignite growth, and it faces headwinds as consumers opt for healthier snacks, the company has strong competitive advantages with its name brands, wide retailer partnerships, and economies of scale. And it still offers a higher dividend yield than Coca-Cola, making it a stock worth checking out.

Brookfield owns a hodgepodge of infrastructure assets spread around the globe. These include utilities, rail lines, data centers, cell towers, toll roads, shipping ports, and more. What all of its assets have in common is that they face almost no competition and generate predictable cash flow in all market conditions. Brookfield then pays out a portion of its cash flow to investors and uses the remainder to buy new assets.

This formula has worked out beautifully for investors over time: 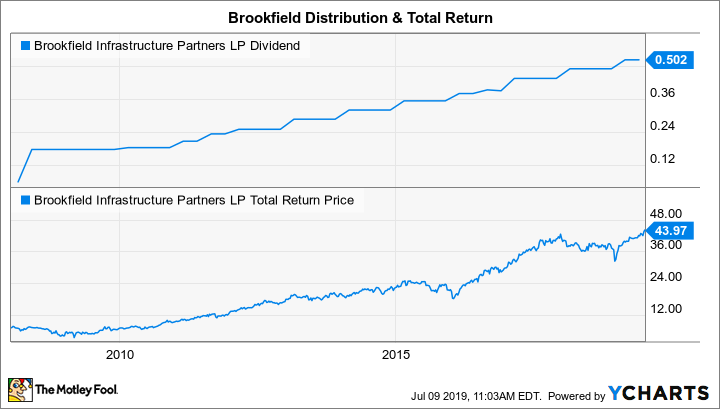 This model works so well because Brookfield makes investments only when the numbers make sense. That usually means it is buying assets from distressed sellers without a lot of other offers on the table. Brookfield then acquires the assets cheaply, makes necessary improvements to enhance its returns, and sells the assets down the road for a tidy profit -- allowing it to repeat the process.

Brookfield isn't a go-go growth stock, but management believes that it can sustainably grow its dividend by 6% to 9% a year over the long term. History shows that it can easily reach that target. The dividend has been raised in each of the 12 years that it has been a publicly traded entity.

With a rock-solid yield, stable operations, and solid long-term growth potential, there are a lot of reasons to like Brookfield Infrastructure Partners much more than Coca-Cola over the long haul.