LeBron James, Kevin Durant, James Harden, Steph Curry. Anyone who's anyone in the world of basketball gets their own shoe. Some are so great they keep making shoes long after retirement.

That's the camp that famous big man Shaquille O'Neal falls into. Nearly a decade after his retirement, he continues to endorse affordable basketball sneakers for kids to counter the expensive kicks of still-active NBA stars. It's been one of Shaq's hallmarks for years; he opted to go the affordable route after a mother complained about the well-north-of-$100 price tag on basketball shoes early in his career.

Shaq is still in the business and has partnered with Skechers (NYSE:SKX) this time around. And since this is an investing article, it's Shaq's company of choice that's of interest: Skechers has been enjoying consumer fanfare around the globe, but this is its first stab at the huge -- but tough-to-crack -- basketball industry. 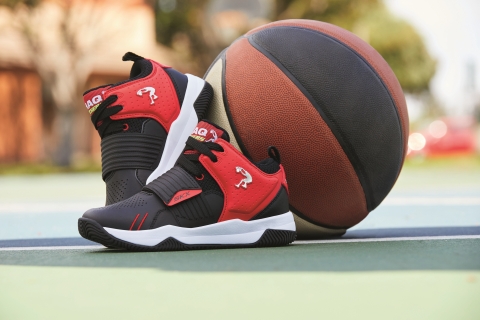 Skechers and Shaq versus the big three

It isn't necessarily surprising that Shaq went with Skechers. The company is known for its casual but athletic-inspired shoes, running shoes, and work shoes, all at a value. After teaming up with Reebok in the 1990s for his signature lineup, Shaq took the low road and started selling his own brand for kids on a budget. Thus, his pairing with the upstart Skechers makes sense.

But from Skechers' standpoint, this is a more interesting move. Lots of companies have tried to enter the lucrative basketball shoe market, with limited success. Although hoops has long been the realm of Nike (NYSE:NKE) and Adidas (OTC:ADDYY), Under Armour (NYSE:UAA) (NYSE:UA) has carved out its own little niche only by having the foresight (and a little luck) to land superstar Steph Curry. Going up against this trio is not going to be easy.

Taking a shot at them makes sense, though. Athletic footwear is a $100-billion-a-year market, with sports performance shoes (of which basketball shoes are a large part) making up more than a third of the total. For tiny Skechers and its nearly $5 billion a year in sales (compared with almost $39 billion at Nike and $26 billion at Adidas), even a small slice of that pie would make a huge impact.

Perhaps that's why Skechers is attacking it from this particular angle. Shoes for kids might be a much easier market to break into, and with a little luck, this product line could even build a loyal following that will come back to the company later on in life. Partnering with a big name should help.

Besides, Skechers is no stranger to this particular brand of marketing. With the exception of golf and track, where it still partners with active professional athletes with its performance shoe lines, Skechers has taken a very different approach to celebrity deals than the high-profile megamillion-dollar endorsements of its high-bred peers. It has favored retired athletes -- especially ones who maintain a very public image like former NFL star Tony Romo. Thus, for its grand entrance into the world of basketball, teaming up with Shaq and his popular TV personality and global celebrity makes sense.

And starting on the affordable front also makes sense. Skechers is primarily an international business, with more than half its sales coming from overseas -- especially in developing markets like China and India. Those markets continue to be the most promising ones for Skechers and account for the lion's share of overseas growth. During the second quarter of 2019, international sales set a 20% year-over-year pace, handily beating its American athletic shoe peers Nike and Under Armour in that growth metric.

Dipping a toe in the water with basketball sneakers for kids makes sense, and partnering with a globally recognizable personality in Shaq could be the ticket to eventually making a bigger splash. For now, it probably won't matter much, but it's worth keeping an eye on in subsequent quarters to see if Shaq by Skechers starts delivering some needle-moving performance.