No. 1 walking shoe company Skechers (NYSE:SKX) is making in-roads for its "performance" shoes, which are designed to optimize a person's movement in a specific sport and intended for "professional and recreational athletes who want a technical fitness shoe." While the company doesn't break out the results of its performance division, this important category is helping the company put up record revenue. Skechers is sponsoring elite endurance races, winning awards, and attracting accomplished athletes in three key sports: triathlon, running, and golf.

Skechers seems to have cornered the market on the endurance sport of triathlon, which is made up of three events: swim, bike, and run. The sport has a variety of distances up to the Ironman, which is a 2.4-mile swim, a 112-mile bike ride, and a marathon-distance run of 26.2 miles. Skechers was an official partner of the 2017 Ironman European Tour, which had races in 14 countries across Europe, providing good international brand exposure for its Skechers Performance branded sneakers. This brand exposure helped the company fuel double-digit growth in Europe in the most recent quarter.

The Ironman sporting season culminates with the Hawaii Ironman World Championships in October, where Skechers-sponsored athletes took second and third place in the men's race, and second place in the women's race. Not only is Skechers a visible sponsor on the world's stages of a challenging race, the company's athletes are performing at top levels in the company's performance gear.

While triathlon is somewhat of a niche sport, Skechers is also competing in the world of track, where front-runner Nike got its start. 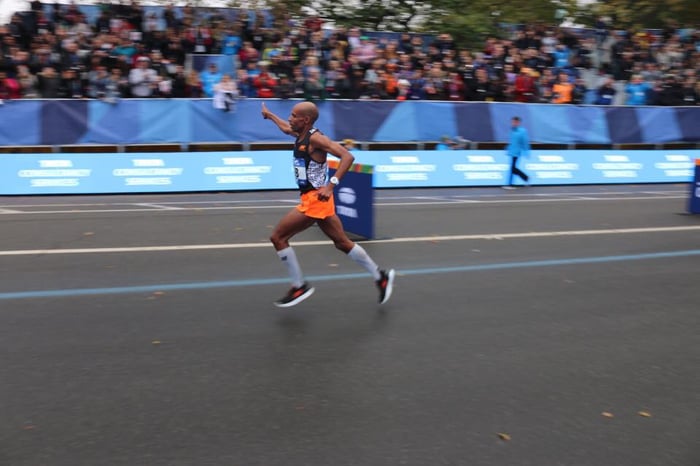 Performing on the track

Skechers' running athletes are anchored by Meb Keflezighi, who has been with the brand since 2011. Since joining the brand, Keflezighi took fourth in the marathon at the 2012 Olympics, won the 2014 Boston marathon, and was on the 2016 U.S. Summer Olympics team. On Nov. 5, he ran his last professional race at the New York marathon, wearing a "custom-built version of the Skechers GO Meb Razor," which he collaborated with Skechers to design. He finished 11th.

According to Skechers, Keflezighi  is "the only athlete in history to win the New York City Marathon, the Boston Marathon and an Olympic Medal." The GO Meb Razor shoe won Men's Journal best new running shoe for 2017.

Perhaps Keflezighi's success helped attract Skechers' newest running athlete, Edward Cheserek, who's just starting his professional career. Signing Cheserek is quite an endorsement of the success of Skechers' performance brand as he is, as the company says, the "winningest male athlete in NCAA Division 1 athletics' history, winning a combined 17 national championships in cross country and indoor and outdoor track and field."

The success of these athletes and plaudits for Skechers' shoes allow many of the company's performance running shoes to be priced in the coveted $100 and above price point. The Go Med Razor retails for $115 on Skechers.com. The brand has an expansive line of running shoes even for runners who want a more value-priced shoe; Skechers performance shoes start at $60.

But Skechers' athletes are not just winning running races, they are winning golf tournaments, too.

Teeing up for success

Nike has a long history in golf, starting with golf shoes in 1984, apparel shortly after, and expanding into the equipment business after it signed golf phenom Tiger Woods in 1996. Nike has since exited the equipment business, but its golf footwear is still important for the company. Skechers has been adding to its golfing ambassadors with Wesley Bryan joining the team earlier in the year, bringing the company's total to eight professionals on its roster. Skechers golf athletes had a successful year with Colin Montgomerie, Brooke Henderson, Wesley Bryan, and Matt Atkins combining to win five tournaments in 2017.

Skechers golf shoes are winning awards, too. Its shoes have been named best spike and spikeless golf shoes for 2017 by MyGOLFSPY, whose mission is to "inform and protect the golf consumer," by providing product reviews. This award winning performance helped the Skechers golfing segment achieve "triple-digit sales growth" in the most recent quarter.

With professional sports being more competitive than ever, athletes use every advantage they can to give them an edge. When accomplished athletes choose Skechers to put on their feet, that is a ringing endorsement for the quality of the footwear. When these athletes win on a national and global stage, that brings credibility to the brand, and it could influence recreational athletes' buying decisions. While Skechers doesn't release the numbers for its performance branded shoes separately, the company has achieved record revenues this year. It's likely that the company can't achieve these results without all of its brands contributing to the success.

While Nike sold more footwear in its most recent quarter than Skechers has sold in the last four, Skechers' proven success in the performance segment is helping fuel its growth around the world.