Investors came into 2019 fearing for the future of the stock market, but the first half of the year was a breath of fresh air for the markets. For private equity specialist KKR (NYSE:KKR), that's been great news, as its investors have regained confidence in the future of the financial markets and have felt more comfortable putting their hard-earned money to work with the asset manager.

Coming into its second-quarter financial report, KKR investors hoped to see continued progress as market conditions improved. Some of KKR's results were mixed, but the future still looks bright overall for the private equity company.

KKR's second-quarter results continued its rebound from a tough end to 2018, although not all of its numbers showed growth. Segment revenue, which includes fees, performance income, and investment income, came in at $907.5 million, down about 2% from year-ago levels. After-tax distributable income of $327.3 million was down a sharper 19% from the second quarter of 2018, but distributable earnings of $0.39 per share were better than the $0.34 per share consensus forecast among investors. 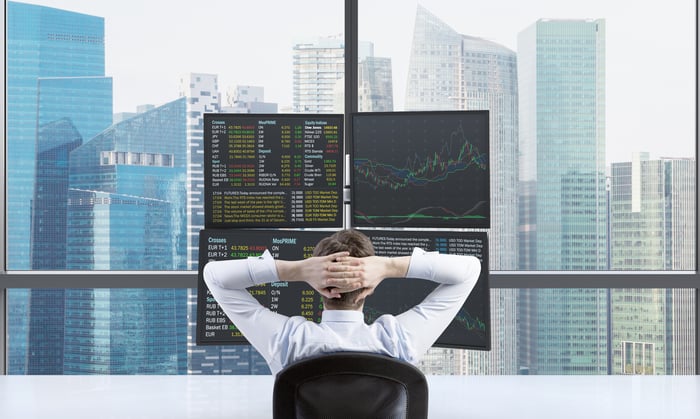 Investors got some good news on several fronts. Assets under management rose to $205.7 billion, up more than $6 billion from their level three months ago. New capital in the private equity, real estate, energy, private credit strategies, and collateralized loan obligation segments all contributed to asset gains, as did favorable markets. Fee-paying assets picked up $3.8 billion to $151.5 billion at the end of the quarter, and that helped produce $303 million in management fees for the quarter, higher by 16% year over year. Book value rose 14% since the beginning of 2019 to $17.81 per share.

KKR kept up its impressive returns. Private equity funds saw a 12% gross return over the past year, while real assets funds saw mixed performance of between 0% and 13%, with energy lagging behind real estate and infrastructure investments. Alternative credit funds saw a 5% return, as did leveraged credit investments.

KKR has high hopes for the future. "We reported solid quarterly results," said co-CEOs Henry Kravis and George Roberts, "including continued compounding in our book value per share." The executives said that a combination of a successful business model, forward progress on key strategic initiatives, and fundraising activity should help boost share performance in the future.

Since the report, KKR has achieved some noteworthy success with its efforts to raise capital. The private equity company is launching its first global impact fund, and it has reportedly exceeded the $1 billion target it set for fundraising for the launch. With the private equity fund addressing social and environmental issues, KKR hopes that it can be a pioneer in the growing socially responsible investing arena and take away the somewhat negative reputation that private equity companies have with socially responsible investors.

However, one interesting note is that KKR essentially stopped its efforts to repurchase shares. The company highlighted the large commitment that it's made since 2015 in making repurchases, with total spending of $949 million. Yet KKR didn't add anything this quarter to the $82 million it spent earlier in the year to buy back stock.

Going forward, KKR shareholders can expect the company to remain exposed to movements in the financial markets. As its recent decline attests, when markets grow turbulent, KKR shares will generally move with them. Yet as long as the general direction of the markets is up, then KKR will have the potential to keep growing and delivering strong investment results.