Plains All American Pipelines (NASDAQ:PAA) continued to benefit from the severe lack of pipeline infrastructure across the U.S. and Canada during the second quarter. The MLP was able to leverage its strategic infrastructure footprint to move oil and natural gas liquids (NGLs) from price-constrained areas to premium markets. On top of that, it secured several more expansion projects that should drive growth in the coming years.

Plains All American's results blew past its expectations. The company initially estimated that it would generate about $600 million of EBITDA during the quarter, but it surpassed that by a wide margin thanks to the strength of its supply and logistics business: 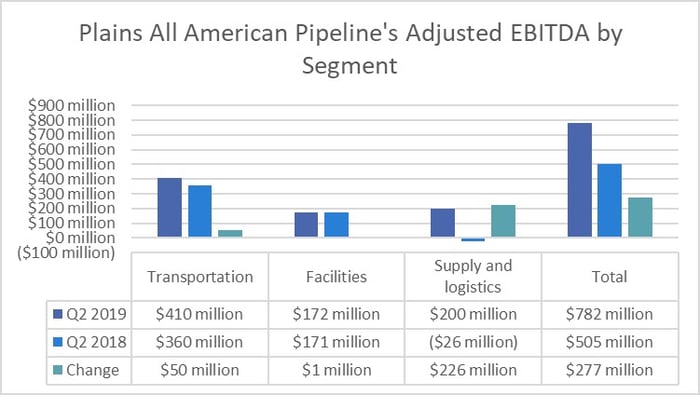 Plains All American's supply and logistics business went from a headwind in the year-ago period to a clear tailwind in this year's second quarter. The company benefited from the wide gap in crude oil prices in infrastructure-constrained production regions like the Permian Basin and Canada compared to market centers such as the U.S. Gulf Coast. That enabled it to capture the difference as it bought crude in lower-priced areas and sold it into those premium markets. This segment also benefited from an improvement in NGL margins, thanks in part to the recent start-up of new petrochemical plants.

The transportation segment delivered healthy growth as earnings jumped 14%. One of the main drivers was higher volumes on its Permian Basin systems, due in part to the start-up of the Sunrise II pipeline. The company's pipelines in the central region also benefited from higher volumes. Those positives more than offset the sale of a stake in the BridgeTex pipeline last year.

Finally, earnings in the facilities segment were roughly flat with the year-ago period because of the stability of the company's long-term contracts. 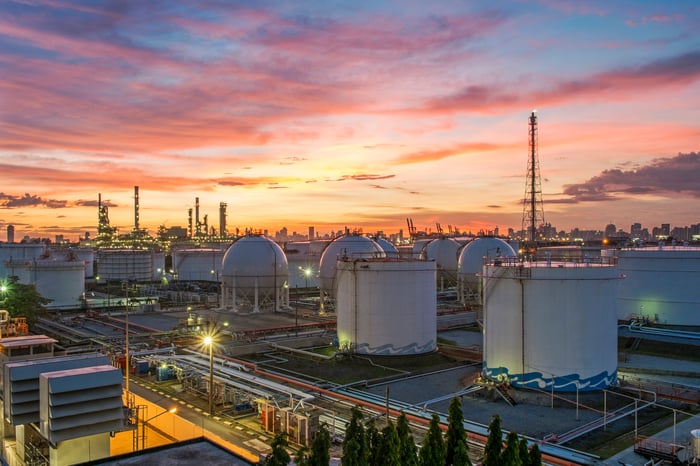 The company's expectation-beating results led it to boost its full-year guidance once again. Plains All American now expects to generate $2.975 billion of adjusted EBITDA this year, up from its prior forecasts of $2.85 billion and $2.75 billion. The company's revised outlook implies a 10.8% increase from 2018's level, well above its initial expectation that earnings would only grow by 2.5%.

Plains All American, likewise, boosted its DCF forecast. The company now expects to produce $2.035 billion in cash, which would be 13.9% above last year's level. That's enough money to cover its 6.5%-yielding distribution by more than two times.

The oil pipeline MLP also approved several new projects during the quarter, which led it to increase its capital budget by $150 million to $1.5 billion. The company and its partners sanctioned the expansion of the Diamond, Saddlehorn, and Red River pipelines. Meanwhile, Plains All American and its partners agreed to build the Red Oak pipeline as well as reverse the Capline pipeline.

One of the key drivers of the company's ability to approve all of those projects is its growing partnerships with others in the sector. For example, Plains All American formed a joint venture with Delek Logistics (NYSE:DKL) to expand the Red River system. It sold a 33% stake in the pipeline to Delek for $128 million, which will give it all the funds needed to expand Red River from 150,000 barrels per day (BPD) to 235,000 BPD. In addition to that, Delek's parent, refiner Delek US (NYSE:DK), agreed to increase its long-term volume contract on the system from 35,000 BPD to 100,000 BPD.

Meanwhile, the company added three new partners to its Wink to Webster oil pipeline project: MPLX, Delek, and Rattler Midstream. Both MPLX and Delek signed on after a partnership to build a competing pipeline decided not to proceed with that project. Meanwhile, Rattler Midstream joined this joint venture shortly after coming public so that it could quickly diversify its asset base.

Those new partnerships will reduce the amount of money Plains All American needs to invest in its expanding slate of projects. That helps reduce its risk while also ensuring that the company maintains a top-notch financial profile.

2019 is turning out to be much better than expected

Plains All American initially anticipated that this would be a transition year as it continued working on shoring up its balance sheet while also funding expansion projects. However, the company is vastly outperforming those muted expectations thanks to the robust results of its supply and logistics business. While the company doesn't anticipate that trend will continue, it should more than offset the eventual slowdown by completing its growing list of high-return expansion projects.