Garmin (NYSE:GRMN) is on a roll. The GPS device giant has posted record sales and profitability results in each of the last three years thanks to a deep product portfolio that sets it apart from more specialized companies like Fitbit.

Better yet, those records have come despite steady declines in what used to be its core sales category of automobile navigation products. By branching out into areas like marine and aviation devices, Garmin has insulated its portfolio from consumer demand shifts while pushing margins higher in the process.

The company's second-quarter report showed more progress along these lines, which led management to raise its full-year outlook for the fourth consecutive year. Below, we'll look at a few highlights from the investor presentation that CEO Cliff Pemble and his team issued to add context to those 2019 demand trends. 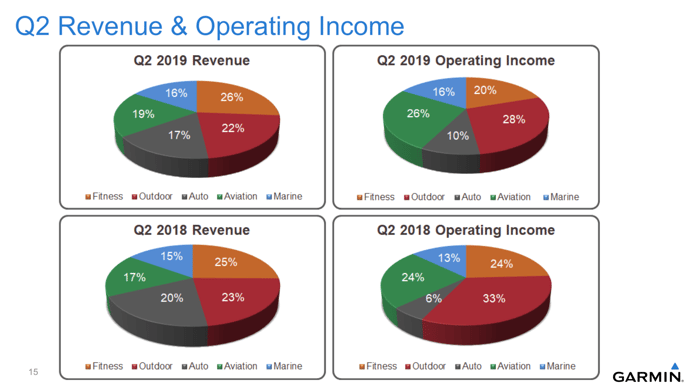 Revenue rose 7% to comfortably exceed the growth pace management had projected for the year and hold roughly steady compared to the prior quarter. Yet within that stable result, demand is shifting significantly.

This slide shows that the company earned 25% of its sales from its aviation and marine segments compared to 22% last year. These are higher-margin businesses than Garmin's fitness device segment, and that fact helps explain why gross margin and operating margin each set new second-quarter records.

Investors can also see the dwindling reliance on the automotive segment over time. That division accounted for 30% of sales in 2016 but is down to below 20% this year. 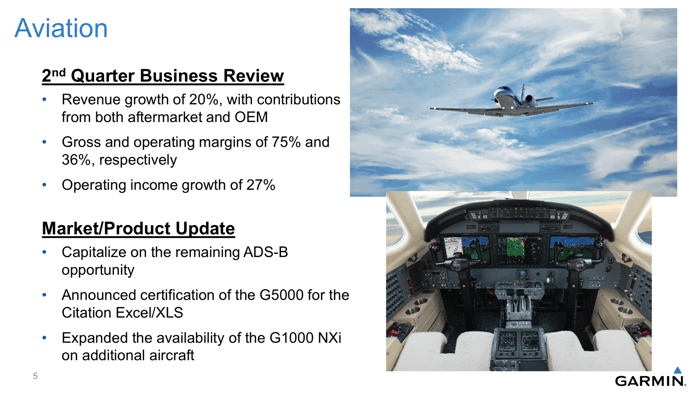 The aviation division was the real standout, as sales spiked higher by 20%. Gross margin in this unit is close to 80% of sales compared to 60% for the broader portfolio, so any success Garmin has here is likely to improve its earnings profile while also helping diversify away from the competitive markets for consumer devices like fitness trackers and smartwatches.

Pemble expressed confidence in Garmin's airplane navigation lineup while citing its dominant market share on private planes. "We are optimistic about the future of our aviation business," he said in the conference call. 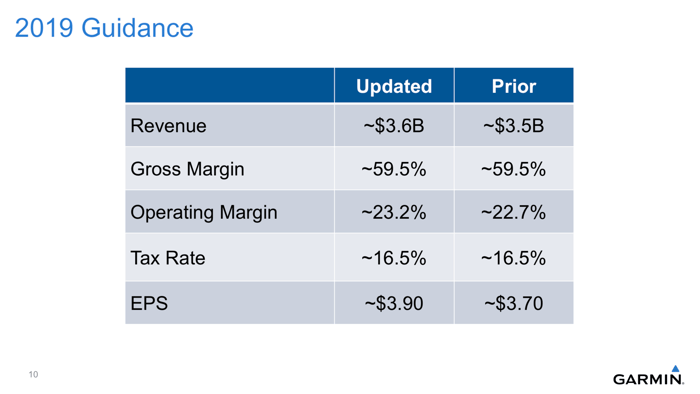 Just as it did last year, Garmin raised its top- and bottom-line predictions following its second-quarter results. Demand for its fitness trackers and smartwatch devices is holding right where it initially projected, but the company sees significantly higher sales in the aviation division and modest boosts on the way for the marine and auto segments. Altogether, these upgrades put Garmin on pace for an 8% revenue increase this year rather than the 5% gain it had originally forecast.

The shift toward higher-margin product areas means there will be an even bigger impact on profits. Earnings should now reach roughly $3.90 per share, or 5% above the prior target. As usual, investors won't have a clear picture of actual results until Garmin navigates through the fourth quarter that puts its key consumer franchises like Forerunner and Fenix watches up against competitive offerings from Fitbit and others.

However, its widening product portfolio means that less of Garmin's business will need to happen at retailers during those key weeks around the Christmas holiday. That means shareholders can be a bit more confident in its projected growth trends even though about half of the fiscal year is still to come.