The day after Square (NYSE:SQ) reported its second-quarter earnings, the company's shares fell 15%. The brunt of the blame seemed to fall on the company's guidance, which reiterated its full-year revenue numbers but projected higher-than-expected losses on the bottom line. After the drop, the stock price was more than 30% off its 52-week highs. Now it's time for investors to determine if this represents a buying opportunity or sign of more problems to come.

Let's take a closer look at four major takeaways -- three good, one worrisome -- from the company's quarter to see if we can arrive at a satisfactory answer to that question. 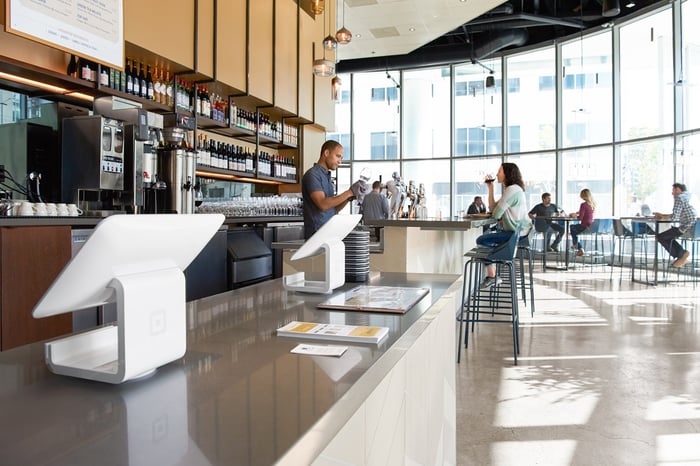 One of the biggest factors in any growth company's trajectory is how fast it is able to grow its top and bottom lines. On this front, Square continues to excel. The company's adjusted revenue grew to $563 million, a 46% increase year over year, and adjusted EBITDA rose to $105 million, a 54% increase over last year's second-quarter total. Gross payment volume (GPV) increased to $26.8 billion, good for 25% growth, driven by an increase in large sellers.

Square's subscription and services-based revenue segment, however, is still the star of the show. The segment, which collectively accounts for a number of supplementary services Square offers its merchants, grew revenue to $251 million, an 87% increase year over year. The biggest drivers to this segment's growth were Cash App, Caviar, Instant Deposit, and Square Capital.

In August 2014, Square acquired Caviar, a food delivery service, for approximately $44.3 million in stock. Five years later, the company sold it to DoorDash for $410 million in a cash and stock deal. That's a nice return on investment any way you slice it. Yes, Square's stock has appreciated significantly since this time, causing some to argue that this isn't as good of a deal as it appeared at first glance.

But that ignores two crucial points. First, pre-IPO companies can afford to issue stock much more than they can afford to spend cash. Second, Square has realized significant value from having Caviar within its ecosystem the past five years. More than a quarter of all of Square's GPV comes from restaurants, many of which were attracted to Square's ecosystem in the first place because of Caviar, then upsold onto Square's point-of-sale platform. For instance, in the company's 2017 fourth-quarter conference call, former CFO Sarah Friar noted:

I also mentioned that some of our newer products like ... Caviar ... are acting as a new front door. So that is another vector where again, we don't have a ton of knowledge where they come from. But certainly, once we get them on to Square, flipping them over into payment point of sale is our core strategy.

By selling for a tidy profit, Square took advantage of opportune timing. Caviar's unique selling point as a part of the company's ecosystem had expired, as third-party delivery companies now blanket the restaurant landscape. The move also positions Square for Restaurants as a neutral platform for integration with all delivery apps, rather than a promoter of its own delivery service.

3. Guidance better than it appears

One of the primary things bothering the market is Square's guidance for the rest of the fiscal year. The company reaffirmed its full-year revenue expectation to be in the range of $2.25 to $2.28 billion, but slightly increased its expected losses. Square noted, however, that the guidance did not include the impact from the sale of Caviar, and it would update its outlook after the sale was finalized. The company also noted its expected losses increased because of the mark-to-market valuation of its investment in Eventbrite.

When specifically asked during the conference call about the lack of an increase in its revenue guidance, CFO Amrita Ahuja responded:

So, with respect to the revenue raise, I'd urge you to remember that this quarter, we've announced the transaction with Caviar. And so we will update you post the closing of this transaction, which we'd expect to happen later this year, with respect to guidance for the rest of the year. Also remember, we raised guidance last quarter by $30 million or two points of growth, which was obviously more than the beat that we had last quarter. And finally, recall that, of course, we're driving growth for the long term. And so the investments that we're making in the back half of this year, we expect to drive growth for us into the future.

The most disturbing thing about Square's quarter? While quarterly shareholder letters are usually filled with new, innovative capabilities and services launched by the company, this quarter's letter was positively underwhelming on this front. Instead of new features, the conference call focused on brand awareness and marketing.

As a shareholder, I'm not too concerned...yet. After all, the company just released a completely revamped online store for sellers earlier this year. That being said, Square's ecosystem will only be as sticky as the products and services within it. If this lack of new products persists beyond a quarter or two, Square could be at risk of offering little more than commoditized services.

All in all, it was a solid quarter for a richly valued growth stock. Based on its full-year adjusted revenue guidance, Square's stock is currently trading at a forward price-to-sales ratio of about 15. With Square having such strong growth and promising prospects, I suspect this sell-off is overdone and that patient shareholders will be rewarded with market-beating gains.