Calls for greater police accountability and for protecting officers from false accusations have made body cameras must-have equipment for law enforcement agencies. Because Axon Enterprise (NASDAQ:AXON) had already saturated the stun gun market with its Taser weapons, it moved into the body cam field as a means of extending growth opportunities, and has now come to dominate it as well.

Yet the announcement that one Colorado sheriff's department is testing a different kind of body cam system has the potential to completely upend Axon's dominance. 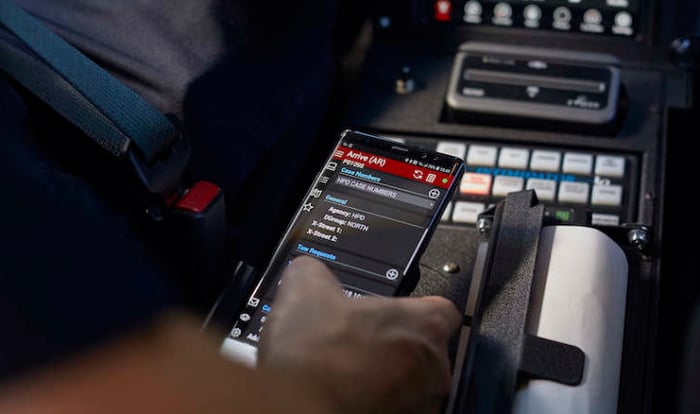 A new use for a familiar device

Samsung (OTC: SSNLF) says the Kit Carson County sheriff's office in Burlington, Colorado, is integrating Galaxy S9 smartphones into its officers' duty vests to function not only as communication devices between officers in the field and command central, but also as evidence documentation tools and body cameras.

Connected to the AT&T (NYSE:T) FirstNet platform -- a broadband network dedicated for use by police, firefighters, and emergency medical personnel -- the smartphones will be able to pull double duty as communication links, backup radios, personal locators, digital cameras, and more.

According to Samsung, the phones are using software from Visual Labs to let them automatically upload footage in real-time, allowing officers to record and live-stream their interactions with the public. Samsung says this software doesn't replace existing smartphone capabilities, such as making calls or accessing email, but rather adds a layer of functionality.

Turning the most popular phone into a body cam

Kit Carson County isn't the first law enforcement agency to use Visual Labs technology, whose software works with any Android phone. The Washington County, Minnesota, sheriff's office uses Kyocera phones. But the Colorado sheriff's office may be the first one to use Samsung phones.

That could be key because although the Galaxy S9 may not have been Samsung's biggest seller, the S-series made the company the world's largest provider over the years. Their ubiquity alone could allow the proliferation of smartphone-based body cams to overtake the market, particularly because the learning curve to operate them would be so small. Their multiple functionality, though, could be what lets them supplant Axon.

Moreover, Samsung's latest model, the S10, comes with its DeX software to allow seamless transition of data access from a desktop computer in police headquarters to the patrol car via the smartphone.

Axon body cams do offer the benefit of being fully integrated into its Evidence.com evidence database system, which makes the technology sticky to the department using it. Axon has also enhanced the audio and video quality of their cameras, and also provide livestreaming and live mapping, but for an additional fee through the Axon Aware service.

They are rugged devices too, which is not inconsequential, especially in close-quarter contact with a suspect. As anyone who has dropped the mobile phone knows, they are readily prone to damage, though there are tough, durable cases for them.

There are also some limitations, foremost that an officer needs to activate the body cam before it begins recording. While there are systems in place that automatically activate a camera when a police car's overhead lights are turned on, many interactions occur without needing the lights activated. And in split-second decision situations, turning on a camera may not be the officer's top concern.

Still, the Axon body cam remains primarily a single-purpose device to let officers record interactions in the field, while providing a record of incidents for later review.

The body camera market is still relatively new and it is constantly evolving to meet the needs of the officer in the field and the demands placed on agencies for accountability. But a multifunction device like a smartphone, when it's outfitted with software like that from Visual Labs, which bills itself as the body cam company that doesn't make body cams and running on FirstNet, could pose a significant challenge for Axon.

Samsung might not be the only smartphone maker with phones being used in the field, but as the biggest manufacturer with hundreds of millions of devices on the market, it is the most prolific and most common, and that gives it an edge to take its business in a whole new direction.