Please ensure Javascript is enabled for purposes of website accessibility
Log In Help Join The Motley Fool
Free Article Join Over 1 Million Premium Members And Get More In-Depth Stock Guidance and Research
By Beth McKenna – Aug 9, 2019 at 8:09AM

Shares of the health savings account provider have been just what the portfolio doctor ordered in 2019.

Shares of HealthEquity (HQY -2.72%), which bills itself as "the nation's largest independent health savings account (HSA) non-bank custodian," rocketed 25.4% higher last month, according to data from S&P Global Market Intelligence. The stock is up 34% in 2019 through Aug. 8. 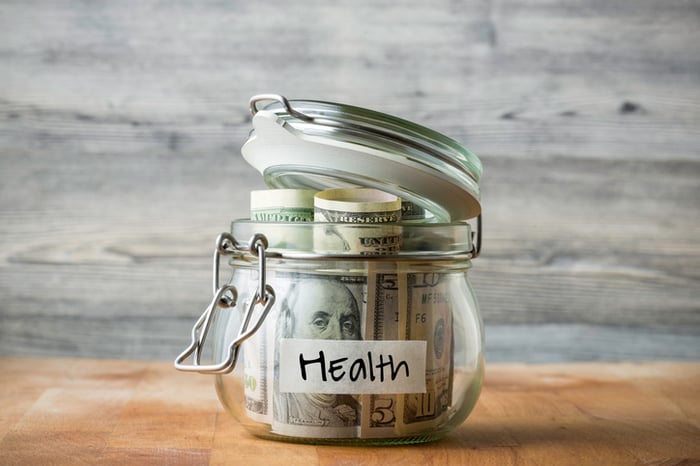 We can attribute HealthEquity stock's robust July performance in part to a continuation of the upward momentum it's enjoyed this year, thanks to the company posting better-than-expected financial results. It beat Wall Street's earnings estimates in both quarters that it's reported this year.

In early June, HealthEquity reported its fiscal first-quarter 2020 results. Revenue jumped 25% year over year to $87.1 million, easily surpassing the $84.1 million that analysts had been expecting. GAAP (generally accepted accounting principles) earnings per share (EPS) soared 81% to $0.65, and adjusted EPS rose 24% to $0.41, also easily beating the consensus estimate, which was $0.33.

Another likely catalyst for the stock's healthy showing in July was investor enthusiasm over the Utah-based company's pending acquisition of WageWorks (WAGE), a California-based leader in administering HSAs. On June 27, the companies announced the all-cash, approximately $2 billion deal.

Moreover, on July 19, shares of HealthEquity popped 3.6% following Bank of America upgrading its rating on the stock to buy from neutral.

When it reported last quarter's results, HealthEquity increased its full-year guidance for both the top and bottom lines. For fiscal 2020, the company expects revenue to be between $339 million and $345 million, which represents growth of about 18% to 20% year over year. It projects adjusted EPS between $1.28 to $1.34, representing growth of about 8% to 13%.

This outlook was established before the company announced its acquisition of WageWorks, which is expected to close by year's end.